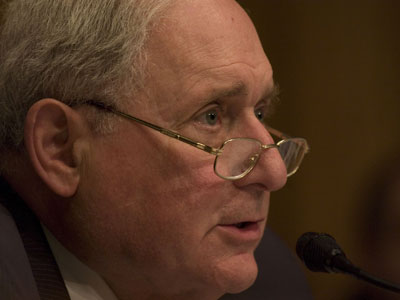 As oil prices (and, by extension gas prices) suddenly soared, the world was caught off guard. Competing theories seeking to explain the sudden rise emerged. Perhaps the world had finally hit peak oil -- the point where oil production inevitably begins to decline due to the finite amount of oil on the planet. That argument was undermined by the amount of oil left in reserve; supply still exceeded demand. Others pointed to geopolitics. Unstable nations or countries hostile to the West like Nigeria and Venezuela are depended on to supply much of the world's oil. Perhaps it was instability that was causing volatility in the markets. Michigan Sen. Carl Levin pointed out during a hearing on energy, "Without doubt, much of our oil comes from unstable parts of the world. But that is nothing new; it's been that way for decades" [source: Levin].

The more Congress and market watchers looked into the rise in oil prices, the more it looked like oil speculation was responsible.

Everything that can be bought or sold has what 18th-century political economist Adam Smith called a natural price. This price is the sum total of the values of everything that came together to create the product or service. Raw materials, labor, distribution -- all of these add to the natural price of a product. Any amount that the seller of a good or service can get above this natural price is profit.

What speculators do is bet on what price a commodity will reach by a future date, through instruments called derivatives. Unlike an investment in an actual commodity (such as a barrel of oil), a derivative's value is based on the value of a commodity (for example, a bet on whether a barrel of oil will increase or decrease in price). Speculators have no hand in the sale of the commodity they're betting on; they're not the buyer or the seller.

By betting on the price outcome with only a single futures contract, a speculator has no effect on a market. It's simply a bet. But a speculator with the capital to purchase a sizeable number of futures derivatives at one price can actually sway the market. As energy researcher F. William Engdahl put it, "[s]peculators trade on rumor, not fact" [source: Engdahl]. A speculator purchasing vast futures at higher than the current market price can cause oil producers to horde their commodity in the hopes they'll be able to sell it later on at the future price. This drives prices up in reality -- both future and present prices -- due to the decreased amount of oil currently available on the market.

Investment firms that can influence the oil futures market stand to make a lot; oil companies that both produce the commodity and drive prices up of their product up through oil futures derivatives stand to make even more. Investigations into the unregulated oil futures exchanges turned up major financial institutions like Goldman Sachs and Citigroup. But it also revealed energy producers like Vitol, a Swiss company that owned 11 percent of the oil futures contracts on the New York Mercantile Exchange alone [source: Washington Post].

As a result of speculation among these and other major players, an estimated 60 percent of the price of oil per barrel was added; a $100 barrel of oil, in reality, should cost $40 [source: Engdahl]. And despite having an agency created to prevent just such speculative price inflation, by the time oil prices skyrocketed, the government had made a paper tiger out of it.