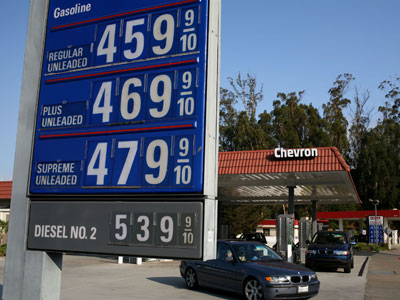 U.S. gas prices rose to record highs in July 2008. In the aftermath, it appears speculators are to blame. See more pictures of the 2008 recession.
Justin Sullivan/Getty Images

The next time you drive to the gas station, only to find prices are still sky high compared to just a few years ago, take notice of the rows of foreclosed houses you'll pass along the way. They may seem like two parts of a spell of economic bad luck, but high gas prices and home foreclosures are actually very much interrelated. Before most people were even aware there was an economic crisis, investment managers abandoned failing mortgage-backed securities and looked for other lucrative investments. What they settled on was oil futures.

An oil future is simply a contract between a buyer and seller, where the buyer agrees to purchase a certain amount of a commodity -- in this case oil -- at a fixed price [source: CFTC]. Futures offer a way for a purchaser to bet on whether a commodity will increase in price down the road. Once locked into a contract, a futures buyer would receive a barrel of oil for the price dictated in the future contract, even if the market price was higher when the barrel was actually delivered.

­As in all cases, Wall Street heard the word "bet" and flocked to futures, taking the market to strange new places on the fringe of legality. In the 19th and early 20th centuries it bet on grain. In the 21st century it was oil. Despite U.S. petroleum reserves being at an eight-year high, the price of oil rose dramatically beginning in 2006. While demand rose, supply kept pace. Yet, prices still skyrocketed. This means that the laws of supply and demand no longer applied in the oil markets. Instead, an artificial market developed.

Artificial markets are volatile; they're difficult to predict and can turn on a dime. As a result of the artificial oil market, the average price per barrel of crude oil increased from $31.61 in July 2004 to $137.11 in July 2008 [source: DOE]. The average cost for a gallon of regular unleaded gas in the United States grew from $1.93 to $4.09 over the same period [source: DOE].