The Federal Reserve System launched a new and improved $20 bill on October 9, 2003. The new bills were put into circulation via the nation's commercial banking system. Complete with new design elements and enhanced security features, the revamped $20 bill is more difficult for counterfeiters to reproduce.

According to the The New Color of Money, the newly designed currency will be "safer because they're harder to fake and easier to check; smarter to stay ahead of tech-savvy counterfeiters; more secure to protect the integrity of U.S. currency."

For almost a year, banks and other businesses and organizations that house or manufacture cash-handling machines and ATMs worked with the Bureau of Engraving and Printing to ensure that their equipment would be compatible with the new currency, but would still be able to handle the older-design bills. The new- and old-design $20 bills will be in use simultaneously until the older notes are gradually removed from circulation with the help of banking institutions and then retired by the Federal Reserve.

In this article, we'll take a look at some of the new design elements and security features of the new $20 bill and discuss the interesting approach the federal government has been taking to inform the public about the new note.

In an effort to stay several steps ahead of counterfeiting criminals, the United States plans to introduce new currency designs every seven to 10 years. With the last American money makeover in 1996, the plan is right on schedule.

Similar to its most recent predecessors in size, shape and security, the new $20 design features three key safeguards that can easily be checked by just looking closely at the bill:

Not only do the improved notes feature security upgrades, but some additional design elements should prove helpful to folks who are visually impaired. With enlarged numbers and new color coding, it should be easier to discern different denominations more quickly.

Not since 1905 has a note of United States currency gone beyond the color palette of green and black. It's not that the good-old U.S. "greenbacks" will no longer be green; it's just that the ever-present emerald will be joined by other pigments (different denominations will get their own distinct background colors). Imbued with subtle hues of peach and blue, the new-design $20 note looks mildly festive.

In addition to the infused color, the new design elements are:

The last newly-crafted currency launch left many consumers and merchants confused, concerned and even frustrated. According to an article in the New York Times:

Tens of thousands of vending machines in post offices and train and subway stations hadn't been set up to accept the revised version...cashiers and other money handlers didn't always know what to make of the new money. Overseas, some consumers panicked, thinking that their old dollars would be worthless.

Determined not to be derailed by past mistakes, the United States government has opted for some pretty unorthodox methods to ensure that the public is well informed about the upcoming money makeover. 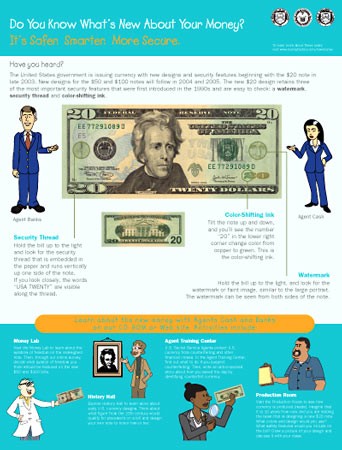 This educational poster can be downloaded from The New Color of Money Web site, to be used in schools, libraries and other public facilities.
Image courtesy U.S. Bureau of Engraving and Printing

When the new $20 bill design was revealed to the public last May, the United States government embarked on a worldwide program to inform and educate the public about the forthcoming currency. Training materials have been made available to merchants and businesses. In fact, much of this material is available online. The Department of the Treasury: Bureau of Engraving and Printing currently hosts an informative Web site called The New Color of Money. Designed to be the source for information about the United States government's latest currency redesigns, this Web site is brimming with content -- including an interactive demonstration of the new $20 bill’s security features.

While these traditional methods undoubtedly proved helpful to some, they couldn't successfully reach the vast majority of the population. Taking a cue from the entertainment industry, the United States government has been using the William Morris Agency (probably the largest talent agency in the world) and Davie-Brown Entertainment (a product placement firm) to help spread the news. Joining notable clients -- Reebok, Cisco Systems and the NFL to name a few -- the new $20 bill has gotten some serious face-time on camera. Even a brief appearance in a popular television show can garner exposure to millions of viewers. With a guest appearance on "Wheel of Fortune" under its belt, the new $20 bill next hit the small screen on "Who Wants to Be a Millionaire," "Jeopardy" and "America's Funniest Home Videos." In addition to headlining hit shows, there have been packaging tie-ins with consumer products and an advertising push with some well-known companies.

For more information on the new $20 bill and related topics, check out the links on the next page.

10 Recession Era Scams
How will the U.S. government spend the $700 billion bailout funds?
How the Association of Junior Leagues International Works