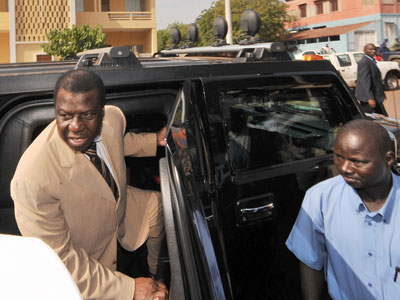 ­Guinea Bissau, West Africa's most prominent narco state, became the major hub between Latin American cocaine traffickers and European consumers quite by accident. In 2005, a group of Guinea-Bissauan fishermen snagged what they later realized was a significant amount of cocaine in their nets. When the Colombian traffickers traveled to the country to purchase back their lost cocaine for $1 million, the Guinea Bissauans -- who live in the fifth-poorest nation in the world and make an average salary of $528 a year for a civil service job -- happily sold it back [source: Kirschke]. Just like that, the cocaine trade in Guinea Bissau was born.

The nation has become the purest -- and most important -- West African narco state. The Latin American drug traffickers have set up shop, building mansions in the capital and overseeing drug operations. The military protects the traffickers and is basically at war with the federal government. Many residents actively participate in the drug trade as traffickers and mules. Like just about every other narco state, Guinea Bissau emerged due to money. In 2007, about $150 million (wholesale) worth of cocaine was passing through its borders each month -- an amount equal to about half of the country's entire annual gross domestic product [source: Hanson]. It's little wonder that the nation became a narco state as a result.

Cocaine use in Europe has skyrocketed due to the development of these West African drug havens. In Spain, the main smuggling port for illicit goods and illegal immigrants from Africa, the percentage of cocaine users now exceeds that of the U.S. [source: Walt]. A 2006 study found that, as a result of this sudden cocaine infusion, 94 percent of all euro notes in circulation in Spain contain trace amounts of the drug [source: BBC]. These bank notes may have been handled by drug dealers or users, or may have served as impromptu straws for sniffing cocaine.

Portugal, another major port of entry for drug smugglers, is of particular use to Guinea-Bissauan traffickers. Guinea-Bissau is a former Portuguese colony and citizens aren't required to apply for visas to enter Europe. This former colonization has helped make Guinea Bissau a drug trafficking paradise.

Infrastructure built during the Portuguese occupation fell out of order after they left the African state. Airstrips located on uninhabited islands, for example, went unused for decades because the nation of Guinea Bissau owns no airplanes. These airstrips have made perfect smuggling sites for the South American traffickers. The virtually unfunded police in the capital city of Bissau have been unable to make any headway in fighting the Colombians. Many Colombians have moved to the city to direct drug operations as police officers rarely have fuel for their five police cars [source: Walt].

Those arrests that are made tend not to stick. The nation's military routinely protects the Colombians. In September 2006, police arrested two Colombian men in a house with nearly 700 kilograms (1543 pounds) of cocaine. Soldiers arrived at the police station and surrounded it until the police released the men and the cocaine. The soldiers loaded both onto their vehicles and drove off [source: Walt].

Guinea Bissau has become a case study in the emergence of narco states. Its president is at war with the military, which has allied itself with drug traffickers. ­On March, 2, 2009, the turmoil between the Guinea-Bissau military and President João Bernardo Vieira ended when the president was shot to death by soldiers as he attempted to escape his presidential palace, which had been under siege for several hours; it was assumed the assassination was retribution for the killing of the head of the Guinea-Bissau military the previous night [source: AP]. The deaths left a "power vacuum"­ in the already unstable nation and the world continues to watch tensely to see what would come of the deaths [source: AP]. Its economy depends solely on drug trafficking. Like other narco states around the world, Guinea Bissau proves that when poverty collides with the will of drug traffickers, a narco state is likely to emerge. When narco states emerge, the drug economy thrives.

­For more information on narco states, please see the links below.