Making Allies out of Drug Dealers 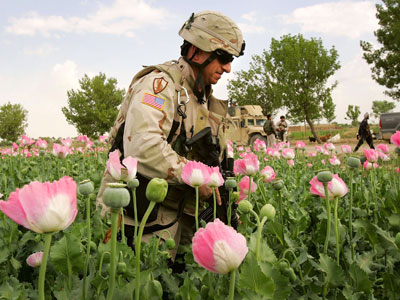 In 2006, a U.S. Army soldier wades through a poppy field in Afghanistan'­s Helmand province, the world capital of opium cultivation.
John Moore/Getty Images

Narco states aren't exclusively a result of the end of the Cold War -- some, like Burma, existed long before the USSR crumbled. Cocaine, which originated in South and Central America, became popular in the United States during the late 1970s as the Cold War still burned hot. It's also inaccurate to say the U.S. was unaware of its allies' drug trafficking activities. U.S. foreign policy has long valued what an ally can offer tactically or geopolitically over that nation's commitment to eradicating drugs [source: Schweich]. In the 1980s, as the administration of President Ronald Reagan ramped up the United States' war on drugs, it was also providing funding and weapons for the same anti-Communist paramilitary groups and governments that were producing and distributing cocaine on a global scale.

The Contra rebels in Nicaragua, which the United States covertly supported during the group's civil war with the leftist ruling Sandinista party, ran cocaine distribution operations while receiving training, funding and arms from the CIA [source: Zirnite]. Gen. Manuel Noriega, a CIA asset since he rose to power in 1981, operated a narco state with the CIA's knowledge during his tenure as president of Panama [source: National Security Archive]. Once news leaked of Noriega's involvement with the U.S. and drug trafficking, he was captured during an American military invasion of Panama in 1989 and indicted on drug charges in the United States. Noriega received a 30-year federal prison sentence.

The United States continues to fight the war on drugs while turning a blind eye to drug trafficking among its allies, most notably in Afghanistan. After the U.S. invaded Afghanistan in 2001, America and its allies toppled the Taliban militia that had ruled the nation under strict Islamic law. In 1999, despite the Taliban's fundamentalist views, Afghanistan overtook Burma as the world's leading producer of opium poppies, the plant from which heroin is derived [source: Traynor]. Under the Taliban, Afghanistan functioned as a narco state, with the government using profits from its state-run heroin processing labs to fund its military and keep its economy afloat.

Afghanistan saw the largest poppy harvest in recorded history in 2006. The crop yield was a 50 percent increase over the previous year, and the harvest made Afghanistan the producer of 93 percent of the global heroin supply [source: Norton-Taylor]. The U.S. made efforts to eradicate poppy crops early in its occupation, but could offer no replacement crop that approaches its profitability for Afghani farmers. President Hamid Karzai, a key U.S. ally, allowed some crop removal by soldiers on the ground, but refused to allow the U.S. to eradicate crops with ­pesticides sprayed from airplanes, a method that's proven effective in fighting Colombian cocaine production.

President Karzai isn't accused of personally engaging in drug trafficking, and he has stated poppy eradication as a goal of his administration. In addition to allowing hand eradication of poppy crops, he's accepted $780 million from the United States for counternarcotics operations like removing corrupt judges and training drug officers [source: Transnational Institute]. His nation, however, remains the world's leading exporter of heroin, generating more than $3 billion annually for the country's economy.

Amid reports that convicted Afghani drug traffickers pay bribes for release from prison, fear has mounted that the country may devolve into a full-fledged narco state [source: Schweich]. With remote areas still ruled by drug trafficking tribal leaders, the nation certainly contains narco states within its borders.

­If questions remain about Afghanistan's status as a narco state, any surrounding several West African nations have been put to rest. In 2008, drug officials around the world watched as West Africa became the new narco state capital of the world.