What Makes a Narco State? 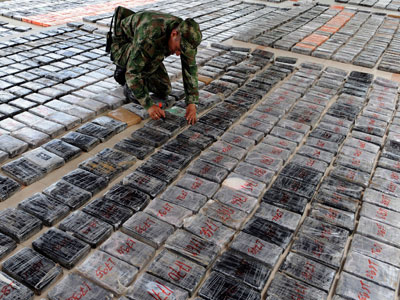 Colombian police capture 3.5 tons of cocaine in December 2008, about one-half of a percent of the county'­s annual production.
Raul Arboleda/AFP/Getty Images

­Ideally, a government exists to protect its citizens. In return for this protection, the public is expected to give up some of its rights to government control. English philosopher Thomas Hobbes called this tradeoff a social contract. One of these controls is the ability to kill others: In civilized society, the government is the only entity that can execute or incarcerate a citizen. Only the government, not vigilante citizens, may punish criminals. This state monopoly on violence, as it's called, is carefully regulated because the nation's legal system should protect citizens from unwarranted imprisonment or executions. Taken as a whole, the social contract is meant to prevent chaos.

The government often keeps up the pretense of this social contract in a narco state, but ultimately the government serves the interests of drug traffickers rather than those of its citizens. The public may remain protected as long as this protection doesn't interfere with state-fueled drug trafficking.

Why would a government engage in such corruption? There's the threat of violence, as we saw in Colombia in the 1980s and 1990s. Competing drug cartels with armed paramilitary groups launched attacks on federal and judicial buildings there. They also kidnapped and murdered officials and judges who sought to bring them to justice. By using the military to challenge the government, these groups established legitimate political parties that served their interests in policy-making decisions.

A narco state may also emerge once a nation's military hierarchy has been corrupted, especially that nation's intelligence officers. Military officials can turn to drug trafficking themselves, as we've seen in places like Guatemala, or they may be bribed into corruption -- a dilemma the African nation of Guinea Bissau currently finds itself in. A corrupted intelligence service backed with armed military might, knowledge of smuggling lines and access to airfields, planes and boats, can create a domino effect that forces other layers of government to abide by a narco state's creation. The military maintains the state's threat of violence, and it can be very persuasive once that threat's trained on the public -- or even the rest of the government -- at the behest of drug traffickers.

Nations that have seen lots of government turnover, especially due to war or coups, also easily can devolve into narco states. Between 2000 and 2002, Guatemala, an undisputed narco state, saw the chief drug enforcement director position change hands nine times [source: UNODC]. Prolonged conflicts may lead to damaged infrastructure, which limits the government's ability to provide basic services to its citizens. This, in turn, reduces that government's public legitimacy and leaves it open to armed challenges.

Conflict also means a glut of guns and war veterans that can use them effectively. This can lead to rebellion and even civil war, especially when an armed group opts to engage in drug trafficking en masse and the central government moves to thwart those activities. For examples of this type of rebellion, let's look at Central America, which is rife with narco states due to its location between South American producer countries and North American consumers. The area has a long history of conflict: In the 20th century alone, Guatemala endured a 36-year-long civil war, El Salvador's engaged in a 12-year-long one and Nicaragua had one that lasted 19 years [source: UNODC]. These conflicts left Central America with such a weapons surplus that unregistered guns outnumber those held by legitimate police and military forces 5-to-1 [source: UNODC].

­Certainly, heavily armed groups bent on maintaining drug trafficking in areas with weakened central governments can lead to the birth of a narco state. However, one should never underestimate the most important factor in the foundation of a narco state -- money.