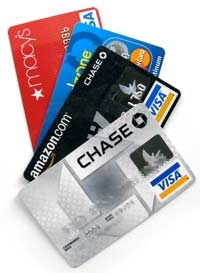 You're watching CNN and they're talking about a recent announcement from Federal Reserve chairman Ben Bernanke, in which he hinted that the Fed would be raising interest rates by a quarter-point in the next week. The stock market plummets, losing 357 points in one day. Why?

You want to save money to buy a motorcycle, so you invest in a five-year CD at the local bank with an interest rate of five percent. But when the CD matures, you notice that the price of motorcycles has gone up by three percent. You really only made two percent interest on that CD. What's going on here?

Before you get all worked up, you should know that interest rates aren't evil. They're the price of living in a world that relies heavily on credit and debt. If interest rates didn't exist, lenders would have no reason to let you borrow money. And if you couldn't borrow money, you could never pay for college, buy a house or a car, or enjoy many of the other advantages of life with credit, like ordering movies and books online with a credit card.

The National Debt Clock at 1133 Avenue of the Americas and 44th Street, in Midtown Manhattan, New York, shows the total US government debt (top) and the calculated amount per US family as of March 26, 2006.
STAN HONDA/AFP/Getty Images

Let's start with a basic introduction to interest rates. 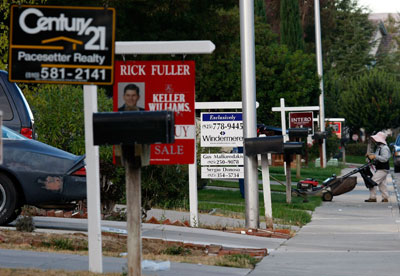 An interest rate is the cost of borrowing money [source: Investopedia.com]. A borrower pays interest for the ability to spend money now, rather than wait until he's saved the same amount [source: New York Fed]. Interest rates are expressed as an annual percentage of the total amount borrowed, also known as the principle [source: Investorwords.com]. For example, if you borrow $100 at an annual interest rate of five percent, at the end of the year you'll owe $105.

The nice thing is that interest rates work both ways. Banks, governments and other large financial institutions need cash, too, and they're willing to pay for it. If you put money into a savings account at a bank, the bank will pay you interest for the temporary use of that money. Governments sell bonds and other securities for the same reason. In this case, you're the lender, and the interest rate is your compensation for temporarily giving up the ability to spend your cash. Unfortunately, savings accounts and government-issued bonds pay relatively low interest rates because the risk of defaulting is close to zero [source: Investopedia.com].

Long-term loans also carry higher interest rates than short-term loans, because the more time a borrower has to pay back a loan, the more time there is for things to go rotten financially, causing the borrower to default [source: Investopedia.com].

Another factor that makes long-term loans less attractive to lenders -- and therefore raises long-term interest rates -- is inflation [source: Investopedia.com]. In a healthy economy, inflation almost always rises, meaning the same dollar amount today is worth less five years from now. Lenders know that the longer it takes the borrower to pay back a loan, the less that money is going to be worth.

But perhaps the most important, and certainly most talked about interest rates are those set by the Federal Reserve, which we'll examine next.

The Federal Reserve and Interest 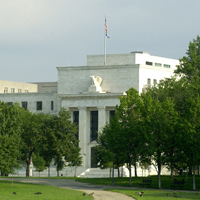 When the United States Federal Reserve chairman talks about interest rates, the whole world listens. A slight, quarter-point adjustment in the Fed's fund rate is enough to send international stock markets soaring or plummeting. But what is this institution that carries so much financial weight?

The Federal Reserve also helps supply U.S. commercial banks with cash reserves. By law, banks must hold a certain amount of cash in reserves to avoid unexpected "cash outflows," such as many people trying to take money out of their accounts at once [source: Federal Reserve Bank of San Francisco]. The Federal Reserve sets the interest rates by which banks lend each other money and a separate interest rate for borrowing money directly from the Fed.

The stated economic goals of the Fed are maximum employment, stable prices and moderate long-term interest rates. To achieve these goals, the Fed uses something called monetary policy: a set of complicated, carefully calculated decisions based on the state of the domestic and international economy. The Fed closely monitors key economic indicators to predict future trends and influence them in the right direction. The overall goal is to keep inflation in check while enabling the GDP (gross domestic product) to grow at a steady pace.

Interest rates are one of the Fed's most powerful tools for implementing monetary policy. The Fed sets several key interest rates that influence borrowing and lending across the economic spectrum. The first is the federal funds rate, which is the interest rate that one bank charges to another for borrowing cash reserves. It's calculated according to basic laws of supply and demand. The more money banks have in reserves, the lower the rate. The more demand for loans, the higher the rate.

The interesting part is that the Fed controls the supply and demand [source: Federal Reserve Bank of San Francisco]. If the Fed wants to lower the funds rate, it buys securities from banks, injecting more cash into their reserves. If the Fed wants to raise the funds rate, it sells government securities back to the banks, lowering their cash reserves. This tinkering with supply and demand is called open market operations, another tool of monetary policy.

The discount rate is another interest rate set by the Fed. This is the rate by which banks can borrow money directly from the Fed [source: Federal Reserve Bank of San Francisco]. The discount rate covers very short-term loans, usually overnight and is higher than the funds rate, because the Fed encourages banks to borrow from each other first. Within the discount rate are three tiers: primary rate, secondary rate and seasonal rate. The primary rate is the lowest and given to financial institutions in good standing. The secondary rate is for slightly less sound institutions, and the seasonal rate is offered to smaller banks in seasonally unbalanced economies, like agriculture or tourism [source: The Federal Reserve].

Now let's talk about how and why the Fed's interest rate adjustments affect the economy as a whole.

Interest Rates and the Economy 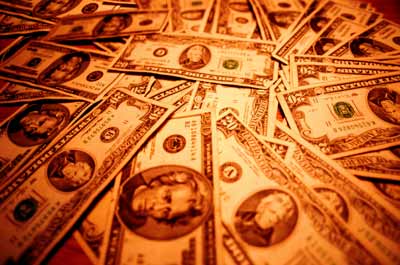 The more money consumers spend, the better the economy is.
John Foxx/Getty Images

The economy is a living, breathing, deeply interconnected system. When the Fed changes the interest rates at which banks borrow money, those changes get passed on to the rest of the economy.

For example, if the Fed lowers the federal funds rate, then banks can borrow money for less. In turn, they can lower the interest rates they charge to individual borrowers, making their loans more attractive and competitive. If an individual was thinking about buying a home or a car, and the interest rates suddenly go down, he or she might decide to take out a loan and spend, spend, spend! The more consumers spend, the more the economy grows.

That's why the stock market tends to go up when the Fed lowers interest rates, or even hints at thoughts of lowering interest rates. It's a sign to investors that people will be buying more goods and services and that companies will ramp up production and create more jobs.

Lower rates are doubly good for the stock market, because it makes other investments less attractive [source: Federal Reserve Bank of San Francisco]. For example, the interest rate paid on U.S. Treasury bonds is closely tied to the federal funds rate. If the funds rate goes down, then bonds and other fixed-rate securities won't pay as much as other, slightly riskier investments like the stock market. The influx of investor money into the stock market will in turn raise stock prices, another indicator of a healthy economy.

A lower federal funds rate also decreases the value of the dollar on the foreign exchange market. While a long-term drop in the value of the dollar is bad news for the U.S. economy as a whole, it can be good short-term news for domestic manufacturers. When the dollar goes down, it becomes more expensive to buy goods and services from foreign companies. This encourages companies to buy domestic products, injecting more cash into the economy [source: Federal Reserve Bank of San Francisco].

Because the Fed's monetary policy decisions have such a powerful influence on the strength and direction of the economy, banks, lenders, borrowers and investors spend a lot of energy analyzing the Fed's every move and word.

For example, long-term interest rates, like those on 30-year home mortgages, have a lot to do with what banks think the Fed will do in the future [source: Federal Bank of San Francisco]. If the Fed hints that it will raise interest rates to combat inflation (more on that in the next section), the banks might be worried that the Fed knows something they don't, namely that inflation is on the rise. As we discussed earlier, inflation affects the real interest that a lender earns on a loan. To adjust for the possibility of rising inflation, banks might raise their long-term interest rates.

Now let's talk about how the Fed's interest rate changes can affect inflation.

Inflation is the rise over time in the prices of goods and services [source: Investopedia.com]. It's usually measured as an annual percentage, just like interest rates. Most people automatically think of inflation as a bad thing, but that's not necessarily the case. Inflation is the natural byproduct of a robust, growing economy. No inflation, or deflation (the lowering of prices), is actually a much worse economic indicator. Also, in a healthy economy, wages rise at the same rate as prices.

A standard explanation for the cause of inflation is "too much money chasing too few goods" [source: Bank of Biz/ed]. This is also called the demand-pull theory. Here's how it works:

Another explanation for inflation is the cost-push theory. Here's how that works:

So how do interest rates affect the rise and fall of inflation? Like we said earlier, lower interest rates put more borrowing power in the hands of consumers. And when consumers spend more, the economy grows, naturally creating inflation. If the Fed decides that the economy is growing too fast-that demand will greatly outpace supply-then it can raise interest rates, slowing the amount of cash entering the economy.

It's the Fed's responsibility to closely monitor inflation indicators like the Consumer Price Index (CPI) and the Producer Price Indexes (PPI) and do its best to keep the economy in balance. There must be enough economic growth to keep wages up and unemployment low, but not too much growth that it leads to dangerously high inflation. The target inflation rate is somewhere between two and three percent per year.

For more information about interest rates and related topics, see the links on the next page.