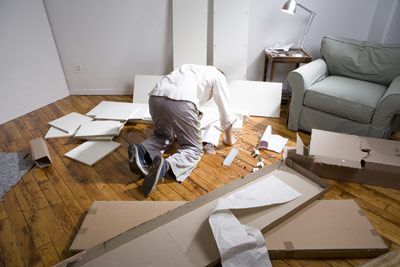 You may start criticizing Ikea as soon as you get home, when you try to assemble the chair or shelving unit you brought with you. A newspaper in New York followed an Ikea customer home to watch her assemble her new chest of drawers. Armed with a guide that provided pictures as instructions, the customer felt that an engineering degree would have been helpful, with assembly taking about two hours and two people [source: Weichelbaum and Paddock]. Ikea's reputation for furniture quality is also not stellar, with the disposable quality of some items likened by analysts to inexpensive fashion retailers like H&M and Old Navy [source: Elliott].

Other people start griping about Ikea before a store even shows up nearby. While many citizens have started blogs and online petitions to bring the store to their area, those who face an Ikea in their neighborhood aren't always thrilled about the traffic and neighborhood transformation that a big box store brings. Ikea often faces local activists' protests when store plans are announced. When the company opened a store in Moscow, the city government even blocked completion of an overpass that would direct customers to the store [source: Fuerbringer].

Denmark also has a bone to pick with Ikea. One prominent newspaper accused the company of bullying Denmark because the names of Danish towns were used for doormats, rugs and carpets, while Swedish and Norwegian names were used for slightly higher-class furnishings. Ikea claimed it was just a coincidence that the names were Danish, but that didn't stop Denmark from feeling that the Swedish company was walking all over them [source: O'Mahony].

Some are suspicious of Ikea's corporate setup. To avoid Sweden's high inheritance taxes, founder Ingvar Kamprad created a nonprofit foundation in Amsterdam and transferred Ikea ownership to the foundation. Essentially Ikea is a nonprofit, one that may have an even larger endowment than the Bill & Melinda Gates Foundation [source: The Economist]. The Economist valued the nonprofit Stichting Ingka Foundation at 28 billion euros ($36 billion) in 2006, comparing it to the 21.4 billion euros ($26.9 billion) reported by the Gates Foundation.

These numbers should be taken with a grain of salt; as a Dutch nonprofit, the group doesn't have to make its accounts public. Ikea releases sales figures each year, but not profits, so the most recent numbers related to profit are from 2004. These numbers revealed a profit of 1.4 billion euros ($1.7 billion) [source: The Economist]. It's estimated that despite the low prices in stores, Ikea generally makes an 11 to 18 percent profit on its sales [sources: Crampton, The Economist].

The nonprofit's mission is to support "innovation in the field of architectural and interior design," but because it doesn't release financial information, it's unclear how the foundation supports that goal [source: The Economist]. Many other aspects of Ikea, such as the trademark, are wrapped up into various holding groups in Luxembourg that don't seem to pay very many taxes. In 2004, two holding groups paid 19 million euros ($23.6 million) in taxes on profits of 553 million euros ($686.9 million) [source: The Economist]. Most of the profits are believed to be diverted to the Kamprads.

Still, it's interesting to consider Kamprad's lifestyle against the millions he must earn each year. While he is estimated to be one of the richest men in the world, he lives like one of Ikea's cost-conscious shoppers. He's known for taking the subway and driving around to find the best bargain hotels. He also insists that Ikea executives take economy class flights and stay at budget hotels when traveling [sources: Stevenson, Bartlett and Nanda].

While the range doesn't match Ikea's product line, there are plenty of cool links and related stories below.