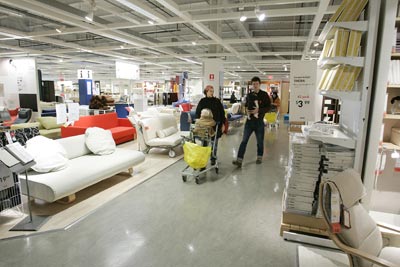 A typical Saturday for people around the world might include shopping at Ikea.
Stephen Chernin/Stringer/Getty Images News/Getty Images

Mention the possibility of a Saturday afternoon trip to Ikea, a store that offers nearly 10,000 home furnishing items, and you'll likely get a variety of reactions. Some people's eyes will light up at the thought of a pilgrimage to a store known for its low prices and sleek furniture. Others might feel a headache coming on, dreading the crowds and the work of putting that unassembled furniture together. Still others may only be thinking of the Swedish meatballs they're going to enjoy in Ikea's famed café.

While Ikea might generate a host of reactions, you can't deny its success. What began as a small store to sell inexpensive furniture to poor residents of Sweden has become one of the most successful businesses today, with 250 stores in 31 countries and sales of 19.8 billion euros ($26.1 billion) in fiscal year 2007 [sources: D'Innocenzio, Ikea].

Ikea got its name from the initials of founder Ingvar Kamprad and the first letter of his farm (Elmtaryd) and his village (Agunnaryd). From a very young age, Kamprad was entrepreneurial, hawking matches and pencils in his village. In 1947, he started selling furniture, but he always kept his costs low -- so low that other furniture stores pressured the National Association of Furniture Dealers in Sweden to stop providing Kamprad with products. That's how Kamprad came to manufacture his own furniture, pricing it so that as many people as possible could afford the items. Today, there are stores all over the world, with the company aiming to sell furniture for 10 to 30 percent less than other furniture stores [source: Stevenson].

Ikea is now the biggest furniture store in the world, with no true worldwide rivals. There's still room to expand, too, because despite huge brand awareness, Ikea accounts for only 5 to 10 percent of the furniture market in the countries in which it operates [source: Capell]. The stores still aim to meet Ingvar Kamprad's original vision; indeed, the octogenarian is known for stopping by stores to check on how things are going. This vision, "to create a better everyday life for the many people," was set forth more than 30 years ago by Kamprad in a manifesto now presented to every Ikea employee.

How does the company stay true to the vision, besides serving up Swedish meatballs and modern furniture? Let's take a look at how Ikea keeps the prices low and the products environmentally responsible. Turn the page to find out more about Ikea's product line.