Ikea and the Environment 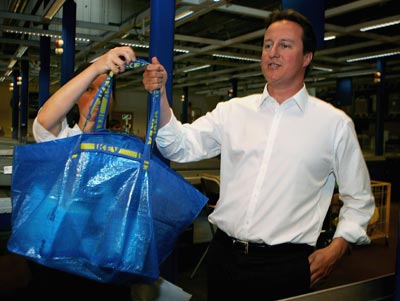 In walking through an Ikea store, you may think that such a large store can't be very energy efficient. But when you get to the checkout, you'll be asked if you want to purchase a plastic bag for a nickel. While paying for disposable shopping bags is nothing new to residents of some countries, it's not typical yet in the United States. That's one part of Ikea's plan to reduce waste and help the environment. A quick look around the checkout area might reveal other clues to Ikea's environmental stewardship; recycling bins are present for customers to drop off used batteries, light bulbs and even the packaging that their purchases came in.

While Ikea does build huge stores, the company tries to do so in a sustainable and environmentally responsible manner. For example, the store in Stoughton, Mass., received Leadership in Energy and Environmental Design (LEED) certification for its green status. The roof of the store is covered with 37,000 square feet (6,968 square meters) of plants, which regulate the store's temperature while absorbing rainwater.

Other environmental measures in construction included the use of recycled materials in construction, reusing 75 percent of construction waste, and energy-efficient lighting [source: Chain Store Age]. Ikea's long-term goal is to have all stores using renewable energy through solar or wind power where possible. In fiscal year 2006, a quarter of Ikea stores and distribution centers were achieving this goal [source: Ikea].

Ikea's environmental stewardship goes beyond the stores though; the products are evaluated not just for a price point, but for their environmental impact. Each phase of the product's life cycle is evaluated, including raw materials, manufacturing, use and end of life. Ikea's requirements for its suppliers and distributors are laid out in its codes of conduct, known as IWAY (the Ikea Way). These agreements outline Ikea's expectations on social and working conditions, including child labor, as well as environmental standards that must be met.

According to Ikea's 2006 Social and Environmental Responsibility Report, IWAY fulfillment had dropped from 90 percent to 85 percent, with the drop largely due to the performance of suppliers in Asia (Ikea does not immediately cease working with suppliers in the case of noncompliance, but tries to work with offenders to address the problems). Ikea explained the lowered rates as a result of increased unannounced audits and issues that could by solved at the legislative level.

Many of the IWAY regulations relate to Ikea's positions on product materials. Suppliers are expected to use wood from responsibly managed forests. Cotton is similarly expected to come from renewable sources, and the metal and plastic used in products is recyclable and recycled. By fiscal year 2009, Ikea's goal is to have 75 percent of raw materials in all products be renewable; products were at 72 percent in fiscal year 2006 [source: Ikea]. Transport suppliers must also meet IWAY codes of conduct related to reducing carbon emissions in distribution, and Ikea strives to pack its products so that more things can fit in one load.

Ikea's other environmental goals cover everything from the Swedish food market (Ikea hopes to have 15 percent of the food products organically produced by 2009) to the catalog (the goal is to use certified forestries for 100 percent of the paper used by 2009) [source: Ikea]. It also partners with WWF, the global conservation organization, and has a program that plants trees in the rainforest.

Is Ikea always using its powers for good, though? We'll take a look at some criticisms of Ikea on the next page.