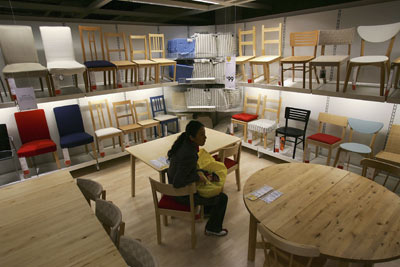 The world of Ikea furnishings is filled with names like Aneboda, Akurum and Anordna. But consumers seem to care less what the products are called (most are named after Swedish towns) and more about how much they cost. With couches retailing for $399, wine glasses going for $2.99 for a pack of six and desks selling for $69, Ikea furniture is a beacon for bargain hunters. Ikea's furnishings come in a range of styles and colors, but the products are generally known for a sleek, minimalist look.

In creating these items, Ikea comes up with a price tag first. The designer is told that a chair must sell for $200, and it's the designer's job to meet that goal. Everything, from the raw materials to the way the product will be delivered, has to be analyzed to meet that bottom line. Production takes place at 1,350 suppliers located in Europe, Asia and North America, with China and Poland leading the way in creating Ikea products in 2006 [source: Ikea].

The furniture comes to the store in flat packs that are cheaper to transport. The furniture stays put in that flat pack because Ikea expects some work on the part of the customer to keep the prices low. Customers assemble the furniture at home, though they can arrange for help from Ikea for a small fee.

Ikea also keeps costs low by using minimal staff in the stores, but sometimes the cost just depends on the location. In 2003, statistician Gabriel Thulin created the Ikea index to compare the prices of Ikea items around the world. He found that people in the United States paid the least for Ikea products, while consumers in Finland paid the most [source: Sylvers]. Don't rejoice yet, Americans; the dollar's fall in value against the euro played a role in the goods being cheaper here, but other factors include local competition, wages and taxes. The United States is currently Ikea's second biggest sales market behind Germany.

Despite the price differences, however, Ikea furnishings tend to sell well in all locations, with the Billy bookcase, Lack side table and Ivar storage system ranking as some of the biggest worldwide sellers [source: Capell]. The average each customer spends in a visit -- about $85 -- is also the same in all countries. [source: Crampton].

Does all this talk about affordable furniture make you want to take a little shopping trip? On the next page we'll peek into Ikea's stores.

You love your Ikea furniture, but would you live in an Ikea house? Scandinavians have the option to do just that with Ikea's BoKlok developments, the first of which opened in Sweden. These apartments, filled with Ikea fixtures, are prefabricated, mass-produced and cost about 25 percent less than comparable apartments in the area [source: Leland]. But as with Ikea furniture, there's a little sweat equity involved in keeping costs low. Residents take turns caring for the grounds and participate in semiannual cleanups and repair projects.

Because of land costs, this project would likely not be cost-effective in the United States, but one person has bypassed living in Ikea units to simply living in an Ikea. In 2008, comedian Mark Malkoff convinced the powers-that-be at Ikea to let him stay in a New Jersey store for a week while his home was being fumigated. His filmed adventures show customers helping him with his morning shave, workouts with his personal trainer in the store aisles, and an Ikea date with his wife, who for some reason did not want to move into the Ikea. See more at http://www.marklivesinikea.com/.