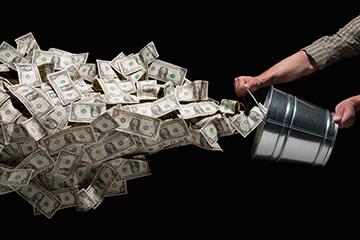 There's far more money than you might think lying inside America's couches and on its sidewalks.
PM Images/Stone/Getty Images

A Bradenton, Florida, man named Rick Snyder developed what might seem like an odd habit. While on his daily four-hour walk around town to feed stray cats, he stopped at car washes along the way, and poked his fingers into the change slots of the self-service vacuum machines that people use to clean the insides of their vehicles.

If you think that would yield an occasional quarter or a dime left behind in haste, you're underestimating our collective carelessness. He found an average of $5.60 per trip, and over a decade amassed $21,495 in lost change, which he eventually donated to a local animal rescue organization [source: Irby].

Snyder isn't the only person who has found money that the rest of us have accidentally left behind or misplaced. Consider the Humphreys, a New York City family who systematically picked up pennies and other coins that they found on sidewalks and stored them in a jar. In the course of a year, they collected $1,013 [source: Vigeland]. In New Paltz, New York, three young roommates spent $20 in 2014 to buy an old couch at the local Salvation Army thrift store. When they got home, to their shock, they discovered more than $40,000, much of it in $100 bills, hidden inside the pillows [source: Chappell].

So how much lost money is floating around out there? Unfortunately, no one seems to have done a comprehensive study. But the amount must be staggering.

Consider that by various estimates, between 66 and 74 percent of the pennies produced by the U.S. Mint get into the hands of consumers and then vanish from circulation [source: Elder]. Since the U.S. Mint produced $4.16 billion dollars' worth of pennies in 2014, that means that as much as $3.08 billion of them will end up dropped on the sidewalk, slipping between the couch cushions or landing wherever else misplaced coins end up [source: U.S. Mint].

As for paper money, the Federal Reserve System ordered $121.7 billion in new bills printed in 2014, 85 percent of them to replace worn-out currency that was being taken out of circulation. Most of the rest represents increased demand [source: Fed]. But even if a few tenths of a percent of that is to replace lost bills, we'd be talking hundreds of millions of dollars.

But how do we lose so much currency? 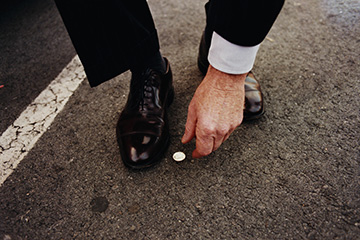 How to Misplace Big Bucks

In an age when practically everyone seems to have a credit card and a lot of us make purchases and pay bills online, it might seem puzzling that anybody actually amasses enough physical cash to lose a sizable sum. One sign of the times: The Salvation Army reported in 2014 that contributions to its Christmas kettle program had fallen off 10 percent from between 2012 and 2014, which one official attributed to the fact that people carried fewer bills and coins in their wallets [source: Schmidt].

The truth is, though, that cash is far from dead. About 65 percent of Americans prefer to use it instead of plastic for purchases of $5 or less, according to a recent survey. And that preference gets stronger with age. While millennials are slightly more comfortable using credit or debit cards for small payments, 82 percent of people 65 and older prefer currency [source: Merzer]

Additionally, many of us don't completely trust the cashless economy — or, for that matter, banks. A 2015 American Express survey found that 29 percent of Americans are keeping at least some of their savings in paper money and coins, and a little more than half of those people have stashed the money in some secret location. According to another study, the most popular place to hide money is in the freezer (27 percent of cash hoarders), with another 20 percent using the sock drawer. A further 11 percent use the stereotypical mattress, and 10 percent prefer the cookie jar [source: Grant].

The problem, of course, is that people sometimes forget where they've stashed their savings. In 2013, a woman forgot that she'd stashed $98,000 in cash in a desk, and mistakenly sold it on Craigslist. Fortunately, she sold it to a rabbi, who found the money and returned every cent of it to her [source: Shaw]. On the other hand, in 2009, an Israeli woman replaced her mother's mattress, not knowing that $1 million was stashed inside. She searched three landfills but did not find that old mattress [source: Associated Press].

In most states, people who find lost money, even if it's just a few coins, are legally obligated to make an effort to find the rightful owner (or at least turn it over to the police). Otherwise they risk being at least technically guilty of theft. One reason for this law is that anyone caught with stolen cash could just claim they'd found it if there was no obligation to return it [source: HG].

Author's Note: How much money do people accidentally throw away every year?

This assignment was a perplexing one to me, because there really isn't any good data on how much money people lose. But even so, I found that there were plenty of interesting anecdotes to relate. Also, I think that I'm going to start buying used furniture, in hopes that I'll find some secret wealth stuffed into the cushions.