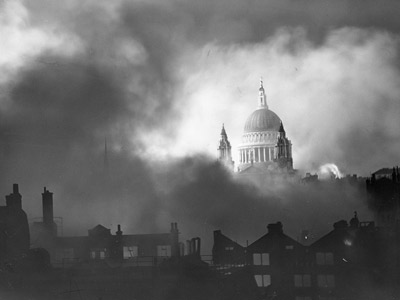 St. Paul's cathedral stands above the smoke of burning buildings during the London Blitz.
Keystone/Getty Images

The year was 1940. London, England was under siege. Night after night, German Luftwaffe bombers strafed the skies, raining fire and destruction upon the city. Thousands of people were killed, and more than a million were made homeless [source: Museum of London].

Across the Atlantic, President Franklin Delano Roosevelt was deeply concerned. Though the United States military was strong, he felt that even more manpower and supplies would be needed to protect American cities if they were to come under attack. The country needed a civilian defense force.

During World War I, the government had established a Council of National Defense to coordinate resources for national defense and stimulate public morale. State and local communities set up their own defense councils to help direct efforts in health, welfare, morale and other activities, but these volunteer groups did not get involved in actual civilian defense because there wasn't a need. Military from other countries couldn't reach America because the aviation industry was still in its infancy.

By World War II, that had changed. Airplanes had become advanced enough for enemies to reach the United States. After launching a mission to London to observe the Blitz, New York City mayor Fiorello LaGuardia wrote an urgent letter to President Roosevelt stating, "The new technique of war has created the necessity for developing new techniques of civil defense" [source: FEMA].

The president took this advice to heart, and on May 20, 1941, he signed an executive order establishing the Office of Civilian Defense (OCD). Roosevelt chose LaGuardia to oversee the new department.

The OCD was created to protect the general population in the event of an attack, keep up public morale if the United States were to enter the war in Europe and involve civilian volunteers in the country's defense. The OCD's jobs included establishing air-raid procedures, supervising blackouts and protecting against fire damage in the event of an attack.

LaGuardia's main goal was to protect the public. But first lady Eleanor Roosevelt thought the OCD's role should be expanded to also include public health and welfare, as well as to increase civilian participation (especially of female volunteers). LaGuardia didn't want to get involved with what he called "sissy stuff," so he eventually hired the first lady to head up these efforts as his assistant director [source: FEMA]. Eleanor Roosevelt founded the Civilian Participation Branch of the OCD.

Organization and Leadership of the OCD

The OCD was divided into nine regional offices, each with a salaried regional director at the helm. Under each regional director, were unpaid volunteer state directors, county and city directors and finally block leaders.

The OCD had four operating divisions:

Fiorello LaGuardia was the first person to head up the OCD. Yet after the bombing of Pearl Harbor on Dec. 7, 1941, there was a new urgency to the OCD's efforts. President Roosevelt was concerned about LaGuardia's ability to manage the agency under the new threat. In 1942, LaGuardia resigned and Harvard Law School professor James Landis took over.

Landis reorganized the agency, recruited new personnel and moved what he saw as superfluous departments to other governmental agencies (for example, he moved the OCD's physical fitness program to the Office of Defense Health and Welfare Services). When there still had been no air raids or threats apparent by 1943, Landis resigned and recommended that the OCD be abolished. Roosevelt didn't listen. He felt there was still a need to keep the agency afloat.

Deputy director John Martin became acting director for six months. When he resigned in 1944, Martin was replaced by Lt. Gen. William N. Haskell, who led the organization until its demise in 1945.

Any American who was alive during World War II likely remembers blackout drills, which were orchestrated, in part, by the OCD. These drills were like dress rehearsals for air attacks. During a blackout drill, a "yellow" warning signal would sound, indicating that volunteers had 15 minutes to ready emergency shelters and extinguish all lights in the area. After 15 minutes, the "blue" warning officially started the blackout. If enemy aircraft were spotted within 10 miles (16 kilometers), the "red" warning would be issued. Air-raid sirens blared, all traffic stopped and searchlights were lit. Fortunately for Americans, these drills remained exercises only. 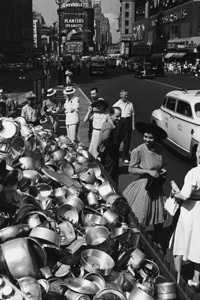 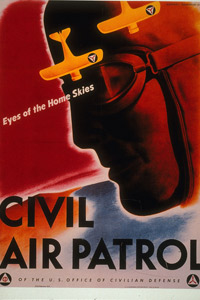