How the Lions Club Works 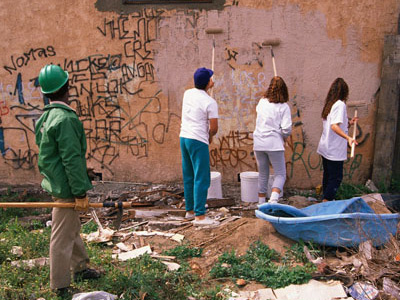 The philanthropic focus of the Lions Club has an interesting back-story. In 1925, Helen Keller stood before a room full of men at the Lions Club International Convention in Cedar Point, Ohio, asking them to imagine what it's like to stumble around in the dark.

In a plea to raise money for the newly formed American Foundation of the Blind, she recounted her own experience with blindness and pleaded with them to join the cause to help more people see the light.

"I appeal to you, Lions -- you who have your sight, your hearing, you who are strong and brave and kind -- will you not constitute yourselves Knights of the Blind in my crusade against darkness?" [source: American Foundation of the Blind].

Since that day, fighting blindness has been the primary focus of Lions Clubs International, which at this time still sponsors free eye screening programs through mobile clinics, pays for cataract surgeries for the poor and collects eye glasses for those in need.

Headquartered in Oak Brook, Ill., the Lions Clubs has a simple motto: "We serve." Today it's one of the world's largest service organizations, with 1.4 million members in more than 200 countries including China, Ethiopia and Iraq [source: Lions Club].

Besides blindness, the Lions Clubs also sponsor programs to provide schoolbooks for children, feed the hungry, provide transportation for seniors and raise money for disaster relief. Groups meet regularly to discuss possible opportunities to give back and there's a certain level of freedom that allows local groups to make decisions based on what their communities need.

Interested in learning more about the Lions? Read on to find out how the organization got started.

History of the Lions Club

Melvin Jones is widely credited as the founder of the Lions Club, including on the Lions Club website. However, some feel the honor should be given to Dr. William P. Woods of Evansville, Indiana. He founded the "Royal Order of Lions" as a fraternal organization and secret society in 1911. He later disbanded that and re-formed it as a service club in 1915. By June 1917, there were some 27 clubs in existence [source: Liberty Indiana Lions].

That same year, Jones began contacting other business clubs to create a network of service clubs across the U.S. Jones, a Chicago insurance broker, wanted to expand the reach of a local business club he belonged to by merging with similar groups across the country. In October 1917, delegates from those groups, including Woods, met in Dallas for a national convention, during which they drafted a constitution, bylaws, objects and a code of ethics [source: The Extra Mile].

Three years later, Lions Clubs expanded into Canada, becoming an international organization. By 1927, 60,000 members in 1,183 clubs were performing charitable services in communities all over the world.

In 1945, Lions Clubs was one of the first NGOs to help draft the charter that created the United Nations. Since then, Lions Clubs International has continued an amicable and supportive relationship with the UN.

In 1957, the first Leo Program -- the youth division of Lions Clubs -- was established by a baseball coach at Abington High School in Pennsylvania. There are now 7,000 Leo Clubs in 140 countries that do community service projects like collecting food and clothes for needy children, repairing playgrounds and starting after-school tutoring programs [source: Lions Club].

Read on to find out more about what Lions are doing at home and abroad.

Lions in the Middle Kingdom

Building a playground for children in California. Feeding 60,000 people in a South African township. Sending a team of eye surgeons to Honduras to treat 100 adults and children.

Those are just some of the activities of the Lions Clubs, which have raised more than $610 million since 1968 to sponsor humanitarian projects across the world.

In Perth, Australia, Lions Clubs have provided free hearing screenings for 30 years. In 2001, the Lions Clubs provided seed money for the founding of the Lions Ear and Hearing Institute, which treats patients with hearing loss and conducts research on hearing loss disorders [source: Ear Science Institute].

In Las Vegas, Nevada, Lions Clubs partnered with the city's University Medical Center to create the Lions Burn Care Center, where thousands of people have been treated. In 2001, Lions raised $300,000 to expand the center and build a new gym where patients can receive physical therapy [source: Lions Clubs].

In a small city near Cape Town, South Africa, the Lions set up grills in the poorer parts of town and cook burgers for local children who help pick up trash. The Lions distribute gloves and plastic bags to the children, who get a hamburger and cold drink when they bring back the bag filled with trash [source: Lions Clubs].

In 2015, a Lions Club in Austria raised funds to construct a new school building with four classrooms, a sports area, restrooms and a storage room for an impoverished school in Rio Blanco, Guatemala [source: Lions Club Annual Report].

Read on to find out how to become a Lion.

More than 4 million children from 100 countries have participated in the Lions International Peace Poster Contest, which encourages children ages 11 to 13 to express their visions of peace using charcoal, pencils, crayons and paint. Each year, judges select 24 finalists from about 450,000 entries. The grand prize winner is awarded a check for $5,000 during a special ceremony in New York City [source: Lions Clubs].

Finding a Lions Club near you is as easy as plugging the name of your town into the search engine on the organization's website.

Most Lions Clubs meet once or twice a month to plan projects and discuss club business. There are also cyber clubs that meet online and special interest clubs based on professions or hobbies such as the Montgomery County Police and Fire Fighters Lions Club, the Las Vegas Opticians Lions Club and the Boise Special Olympics Lions Club.

Membership in a Lions Club is by invitation only. Through the organization's website, contact a member and let the Lion know you'd like to attend a meeting or participate in a service project. Expressing interest is a great way to let the Lions know you want to join.

You can also call the international headquarters for information at (630) 468-6857 or contact the organization by e-mail at newmemberinquiry@lionsclub.org. Through the Web site, you'll also have the opportunity to fill out an online prospective member form, which will be forwarded to a Lions Club in your area. At that point, it's up to your local branch to contact you [source: Lions Clubs].

Once you've attended a meeting or service event, you can get a better feel for the group and its goals. If you're still interested, ask an active member to sponsor you. If you can't find a club near you, you can order a new club kit and start your own.

Let There Be Sight

Since the inception of SightFirst in 1990, Lions Clubs International has sponsored 7.5 million cataract surgeries, restoring vision to millions of people.