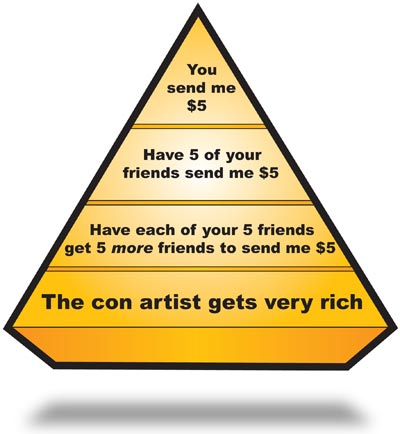 In the "pump and dump" con, con artists cold call people with offers to buy an impressive stock. They use hard sell tactics and claim they have information that the stock will be very successful (the "pump"). The con artists themselves own many shares of these stocks, but the stocks are worthless and represent an investment in a non-existent company. Once enough investors buy the stock, its value starts to increase. When it gets high enough, the con artists sell all their shares (the "dump") and disappear with the proceeds as well as all the money the investors gave them.

These common cons continue to fool people year after year, even though they are illegal and simply don't work. Although pyramid schemes predate the 1920 scam run by Charles Ponzi, his scheme reached so many people and bilked them out of so much money that his name became synonymous with this type of scam.

In any pyramid scheme, investors are recruited to pay the company owner, who is the con artist at the top of the pyramid. There may be an actual business, such as Ponzi's buying and reselling of postal reply coupons to take advantage of exchange rates, or it may be a pure pyramid. People pass money to those above them in the pyramid and wait to receive money from anyone who signs up below them. Even if there is a real business, it can never make enough money to repay all the investors. Chain letters instructing people to send $5 to 10 others on a list are also pyramid schemes.

Each person who joins the pyramid sends money to someone above them. Then they have to recruit people below them. The new recruits send their money up the pyramid. Since the number of people recruited increases at each level, the people in the higher levels will supposedly make huge amounts of money. A simple common sense question would stop anyone from entering such a scheme: if we're going to make all this money without actually selling anything, where is the money coming from? The answer: most of the people in the pyramid are going to lose their money. Only the top two or three levels will see any money (and the recruiter will tell you you're at the top even if you're nowhere near it). Eventually, it becomes impossible to recruit enough people to support the pyramid. If each member has to recruit five new victims for the level below, it doesn't take too many levels before the exponential increase in needed recruits exceeds the entire population of the Earth.