Browse the article You Can't Buy Anything for a Penny Anymore, Not Even a Penny 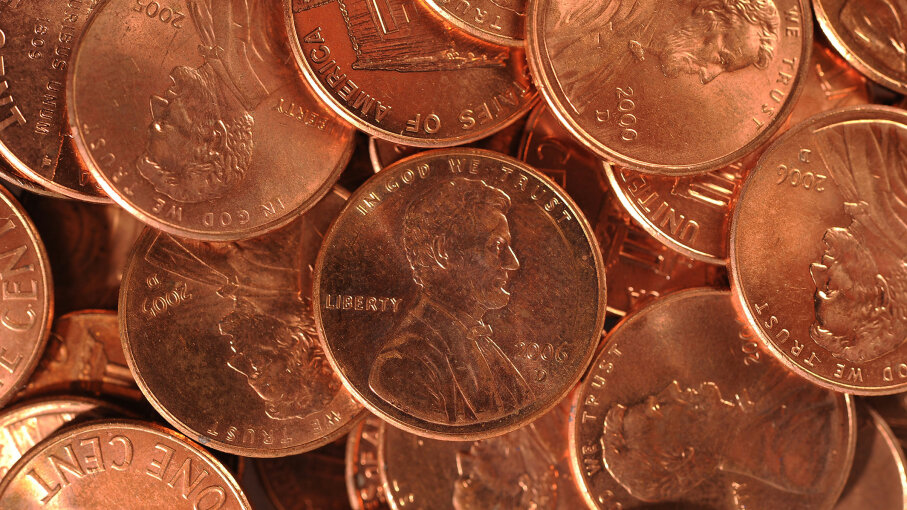 What can a penny buy these days? Matt_Brown/Getty Images

Good thing "Honest Abe" still sits proudly on the $5 bill, because his poor pennies are taking a beating. For decades, a small but growing chorus of economists and politicians have been calling for the penny to be abolished. That's because the penny has long outlived its usefulness. The United States ditched the half-penny in 1857, when it was worth what a dime is today. By that logic, the penny should have been retired in 1950.

Yet the copper-topped coin persists. Which made us wonder, what can you still buy for one cent? As NPR's Planet Money team discovered in 2014, pretty much nothing. So instead, we decided to assemble a list of things that you might be tricked into believing still cost a penny -- — but absolutely don't.

Yup, it costs the U.S. Mint more than one cent to make a penny -- 1.55 cents per penny in 2016 -- even though all pennies since 1982 have been made of 97.5 percent zinc and only 2.5 percent copper. That means that the U.S. government loses around $50 million a year making a coin that many people either leave at the cash register or lose to the black hole beneath their couch cushions.

The unprofitability of producing pennies is one of many reasons why other industrialized nations -- most recently Canada, but also Australia, Denmark, New Zealand, Norway and Sweden -- have quit making their least valuable coinage. Still, a 2014 poll found that a small majority of Americans oppose killing off the penny, and a whopping 71 percent said that if they saw a penny on the ground, they'd stop and pick it up. Gross.

When your grandma (or great-grandma) was a kid, every neighborhood and small town had a pharmacy, five-and-dime or straight-up candy store that sold penny candy. Cheap and chewy treats like NECCO Wafers, Tootsie Rolls and dozens of other sugary snacks sold to kids for a penny a piece or in bulk for even less.

As the penny lost its purchasing power, and mom-and-pop candy shops were run out of business by big chain grocery stores, penny candy went out of fashion, relegated to the nostalgia bin of history.

Thanks to the internet, though, there's been a resurgence of candy companies selling bulk bags of old-fashioned taffies and wax-coated root beer bottles. (Remember candy cigarettes? Wow.) But does mean that you can actually buy any of this retro candy for a penny?

We called the Penny Candy Store in Sharon, Massachusetts, and the friendly young lady who answered the phone informed us that the cheapest piece of individual candy will cost you 15 cents. On the store's website, you can buy a box of 60 satellite wafers (think sour Styrofoam) for $6.75, or 11 cents for a taste of candy history.

Penny stocks sound like a great deal. You can buy tons of shares with relatively little cash and if the price zooms up overnight, you're in the money! Oh, if it were only that easy.

First of all, penny stocks don't actually trade for pennies a share. It's a catchall term for any stock trading under $5. Penny stocks are bought and sold "over the counter" on exchanges like the OTC Bulletin Board, not the New York Stock Exchange or NASDAQ. Penny stocks are so cheap, because the companies they represent are poor performers, sometimes with one foot in bankruptcy court.

Trading in penny stocks is highly risky, and don't let the frugal name fool you. You could still lose a lot of money. Every stock broker, even online brokers, charge a fee each time you make a trade. So even if a share of Bad Idea, Inc. sells for 1 cent, ETRADE is going to charge you $6.95.

But to actually make money on penny stocks, you have to buy a lot of shares, and penny stocks are rife with scams aimed squarely at newbies like you. You might be better off investing in penny candy.

Let's say you need a single rewritable DVD. Maybe you fell into a time machine and were transported back to 2003, or you'd like to make a DVD copy of your favorite YouTube videos for an elderly aunt. So you go to Amazon and find this item priced at exactly one penny.

This 1-cent wonder is one of many confoundingly cheap things listed on stuffforapenny.com, a real-time compendium of everything currently being sold on Amazon for the lowest price possible. Jewelry, socks, baseball cards, teeth whitening powder, all selling for a single penny.

Except, of course, they're not. Even if you're an Amazon Prime member, none of this stuff includes free shipping, which starts at $3.99 for small items. Still, how does an Amazon seller make any money selling a single item for four bucks (1 cent plus shipping)?

We checked with James Thomson, the former business head of Amazonservices.com, which recruits third-party sellers on Amazon, and who's now the president of PROSPER Show, a trade show for Amazon Marketplace sellers. In an email, Thomson said that it used to be easier for companies to make a slim profit on 1-cent items because Amazon only charged a 15 percent commission, and 15 percent of 1 cent is basically nothing.

But Amazon now charges a $1 minimum fee on all items, which Thomson says is an attempt to "actively discourage" sellers from pricing items ridiculously low. Using that rewritable $4 DVD as an example, even if the seller mails it at the $2.50 media shipping rate offered by the U.S. Postal Service, profit drops to 50 cents once Amazon's $1 fee is subtracted. Then there are labor and overhead costs to consider.

"Some sellers might make a little money, but certainly no one is getting rich using this approach," wrote Thomson.

Now That's Cool
The pro-penny lobby tells us that Coinstar, the coin cash-in service, has helped people turn billions of pennies into charitable donations. Since 2007, Coinstar users have donated $72 million to charities through its kiosks, and 20 percent of those donations -- to groups like the Salvation Army and the Leukemia and Lymphoma Society -- came from pennies.