10 Ways to Ruin a Job Interview 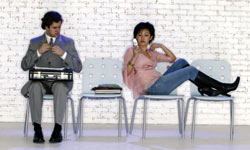 Job interviews are stressful enough without you sabotaging yourself. But you'd probably be surprised how many strikes job seekers put up against themselves before they ever answer a single question.
Comstock/Thinkstock

I wasn't looking for a job, having already committed myself to the vagaries of a freelancer's life. But when a huge publishing house in New York City asked me to interview for a position, I couldn't say no. If nothing else, perhaps, I could walk away with some contract work.

As I sat in the lobby, my prospective boss came out to greet me. She was young. So young. Too young. Very young. Not that I have anything against young people -- I used to be one myself. Yet, when I see a person her age in a management position, I know she isn't making a lot of money, which means, neither will I.

We walked into the conference room where two other Lil' Rascals were waiting. Suddenly, I wanted out, but it was too late. We went through the usual pleasantries and got down to business. As far as job interviews go, it went well. I told them all the right things and nodded my head at all the right times, all the while staring at their un-wrinkled faces and trendy haircuts. I even managed to seem excited.

Then I decided to commit hari-kari. When I thought the time was right, I tactfully asked Darla, Alfalfa and Spanky what the job paid. Perhaps it was arrogance, perhaps pride. Maybe I wanted to show that I was doing them a favor by interviewing. It didn't matter. I smirked, or perhaps grimaced, when they told me. I thanked them for their time and off I went.

I never heard back. Go figure! While I purposely sabotaged that interview, many people don't know any better. One colleague said she received a resume from a person where every line was a different color. "We just HAD to write her back and tell her how unprofessional it was." Then there was the candidate who sent in her resume on a cake. Yummy, yes. Interview? No!

If you want to see the best ways to ruin a job interview -- and who doesn't really? -- keep reading.