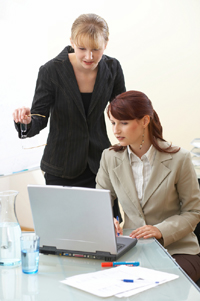 Here's how it works. Let's say a company hires a new employee and needs to get the new hire set up with an e-mail account, a network password, an ID card, a health insurance policy, et cetera. A 2006 study by the Society of Human Resource Professionals found that businesses spend an average of $4,745 on each new employee [source: Internetnews.com].

With human resource management software like PeopleSoft and SAP, HR departments are able to accomplish more (and spend less) with fewer applications. By integrating conferencing functionality into these programs, the new hire process can be streamlined even further.

When a new employee is entered into the HR system, he's not only immediately signed up for an e-mail account and ID badge, but he's also automatically registered with the remote conferencing service. One of the first e-mails the new hire receives is a welcome from the conferencing company with his user ID and temporary password for scheduling and joining conferences.

Another example of leveraging a conferencing API is to add VoIP (Voice over Internet Protocol) audio conferencing functionality into different Web-based applications. One example could be a social networking application like Facebook. Facebook released its API so that developers could create widgets or small applications that add fun, new functionality to the popular site. Savvy developers are already creating widgets that allows Facebook "friends" to easily set up audio chat and VoIP conference calls with each other [source: Facebook].

There are several advantages of leveraging a conferencing API for developers, businesses and the software providers themselves:

The future of conferencing APIs is the mashup. A mashup is a Web-based application that draws on the functionality of two or more other Web applications [source: IBM]. Software mashups get their name from musical mashups, which are skillful mixes of two unrelated pop songs.

A popular source of Web software mashups has been the Google Maps API, which spawned mashups with photo sharing sites to map out where each digital photo was taken. The Web site ChicagoCrime.org mashes Google Maps with the crime database of the Chicago Police Department to map crimes by street, neighborhood, type of crime and date [source: IBM].

By opening their APIs to the world, it's likely that we'll see conferencing functionality -- especially inexpensive audio and video conferencing -- mashed up into all sorts of disparate Web applications.

For more information about leveraging a conferencing API and related topics, check out the links below.