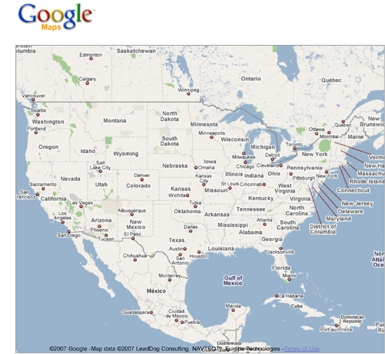 Google maps is an example of an API.
Image courtesy of Google

A conferencing API -- or any API for that matter -- allows a software application to communicate with a remote application over the Internet through a series of calls [source: TConsult, Inc.] An API is, by definition, an interface, something that defines the way in which two entities communicate [source: Thom Robbins.net Weblog].

With APIs, the calls back and forth between applications are managed through something called Web services. Web services are a collection of technological standards and protocols, including XML (Extensible Markup Language), the programming language by which applications communicate over the Internet.

Exactly how does a software developer leverage a conferencing API? He programs new or existing software to generate the right XML messages to tap the power of remote applications. Let's take conference scheduling, for example. With the right code, he could build conference-scheduling functionality into the company's existing e-mail system. Or, perhaps he could develop an entirely new instant messaging application that has one-click instant audio conferences.

Companies who release their API often do so as part of a larger software development kit (SDK) that includes the API, programming tools and other instructional documents to make the developer's job easier.

APIs and Web services are completely invisible to Web site surfers and software users. Their job is to run silently in the background, providing a way for applications to work with each other to get the user the information or functionality he needs.

Along with XML, the following technological standards, protocols and programming languages are what make Web services work:

Now let's look at some examples of how software developers and businesses can leverage a conferencing API.