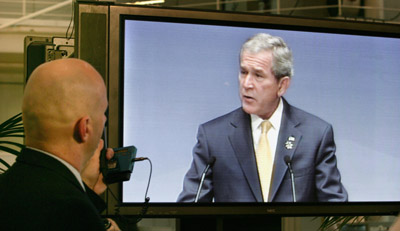 A conference call, or teleconference, is an easy, affordable way to hold a telephone meeting with participants around the country, or even the world. By recording these calls, a teleconference can serve two purposes, both as a real-time communication tool and an archival record.

There are many good reasons why small and large organizations -- and even individuals -- would want to record and archive a conference call. Here are a few: 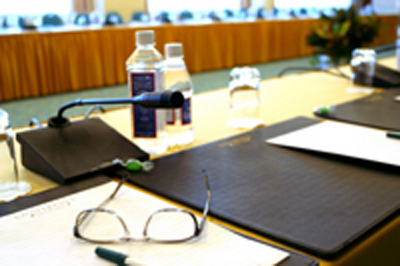 For the best quality, microphones should be placed directly in front of the presenter.
© Photographer: Izaokas Sapiro  | Agency: Dreamstime

When recording conference calls with microphones, the first thing to consider is how many people will be speaking during the call [source: Jake Ludington's MediaBlab].

Another type of conference call is a few-too-many setup, in which three or four speakers take turns presenting information to the rest of the teleconference participants. To achieve the best sound quality when recording a few-to-many conference call, you'll want to have a separate microphone for each presenter [source: Jake Ludington's MediaBlab].

In any recording situation where you have multiple microphones, you'll have to adjust each microphone's level so that one presenter doesn't sound really quiet in the recording, while another sounds really loud.

To do this, all the microphones will have to be connected to a mixer. The mixer assigns a different track to each microphone. An audio technician can use the mixer to adjust the amplification of each track until they reach the line level (0.5-2V) or recommended base level for audio recording [source: Media College].

There are even professional conference microphones especially designed for large conference rooms. These microphones are programmed to automatically adjust levels and to boost the common frequencies for human speech. Several table microphones can also be "daisy chained" together to extend over very long conference tables [source: Soniclear]. 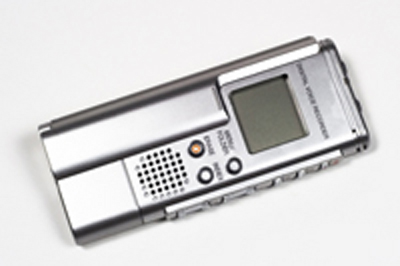 Digital recording is the process of turning analog sound waves into the 1s and 0s that computers understand. For more on the differences between analog and digital recording, see our article How Analog and Digital Recording Works.

The simplest digital device for recording conference calls is a small handheld digital voice recorder. These gadgets are similar in look and feel to normal mini-cassette tape recorders, except they can record hundreds of hours of digital audio on their small built-in flash memory cards [source: Amazon].

Most desktop computers and laptops have a built-in microphone for capturing audio, but for recording conference calls, you'll probably want to invest in a PC-compatible external microphone. Most modern microphones are built for use in both analog and digital (computer-based) recording.

There are many microphones available that plug directly into the standard USB port of a computer. Others use a 1/8" plug to connect to the line-in or microphone jack on the computer's sound card.

A sound card is another digital recording device that comes standard with most desktop and laptop computers. Sound cards are responsible for converting audio back and forth between analog signals and digital data. Sound cards also contain their own small processors and memory so that the computer's main CPU doesn't have to do a lot of extra work to process incoming audio or play outgoing audio.­

Audio editing software is useful for recording conference calls because you can chop down a long call and only save the most salient moments. Or you can clean up a recording that was made in less than ideal circumstances, like on a cell phone or in a crowded conference room. Audio editing software is also essential for preparing audio files to be burned to a CD for archival purposes.

Now let's look at some gadgets and techniques for recording multiparty conference calls. 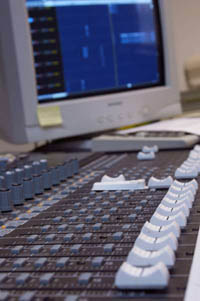 A multiparty conference call is one in which there are multiple presenters in different locations.

You can use microphones when recording multiparty conference calls, but it can get a little complicated. You have to set microphones at all the different locations to record all the presenters individually. Then you have to take those recordings and paste them together using audio editing software. The result will be a high-quality recording, but will require considerable time and energy.­

The most common method for recording multiparty conference calls is to use a simple phone adapter called a Telephone Recording Control that captures the audio from the phone call and routes it into a cassette recorder, a digital recorder or straight into a computer.

Here's how the phone adapter works:

The advantage of using a phone adapter to record multiparty conference calls is that the adapter itself is inexpensive (around $15 to $20) and easy to set up.

The recorded call will remain on the conference call system for a specified amount of days or it can be e-mailed to the moderator and/or participants as a digital audio file like WAV or MP3.

Chris Pirillo, host of a popular online videocast, has started to experiment with conference calls as a solution for handling call-in questions. Pirillo has had callers dial into a conference call with a special pin and press "9" to raise their hands with a question. A conference call operator then screens each caller to find out what they're going to ask [source: Chris Pirillo].

But Pirillo sees more in this than simply organizing his question queue. Recording these conference calls can become a powerful way to archive and tag useful content. Once a question is asked and answered on air, one of his producers can take that recorded chunk of audio, tag it with relevant information about the content of the question and post it to other Web sites and news feeds as standalone content [source: Chris Pirillo]. Someone searching for information about how to record a conference could find Pirillo's audio answer online and the rest is history.

For more information about recording conference calls and related topics, check out the links on the next page.