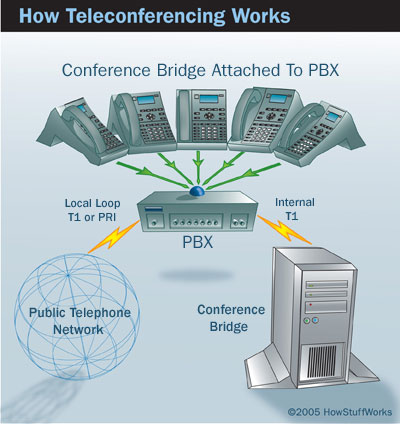 A diagram of how a teleconferencing bridge works.
©2007 HowStuffWorks.com

If you've ever made a three-way phone call, you've already teleconferenced. When we talk about teleconferencing, we're referring to conference calls, where small to very large groups of people can participate in, or at least listen to, the same phone conversation.

The conference bridge then links to a private branch exchange (PBX) within the company. A PBX is a miniature switch that routes calls to all the different internal phone extensions in the company. This is especially important for in-house conference calls.

There are many companies that host teleconferences and also offer helpful Web tools and in-call features. Here are some common features of teleconferencing services:

Teleconferencing's advantages are that the technology is familiar to anyone who uses a phone, it's easy to set up, and it offers good audio interactivity for small groups. Its disadvantages are that it greatly limits collaboration and interaction for larger groups, and that audio-only presentations are often less engaging to attendees.

Read on to learn about Web conferences and Web seminars. 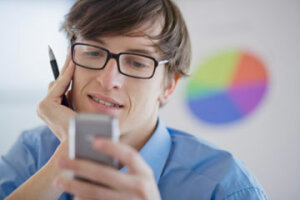