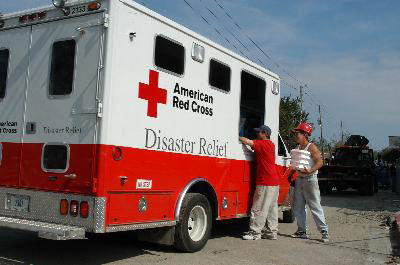 The American Red Cross has not always operated smoothly. The end of Clara Barton's tenure as president of the Red Cross was marked by an internal power struggle that resulted in accusations of improper bookkeeping on her part, and ended with her resignation.

Controversy involving the presidency of the Red Cross erupted again during the 1996 campaign for United States President. Senator Bob Dole was running as the Republican candidate and his wife Elizabeth Dole was head of the American Red Cross. There were reports that she used a personally selected group of advisers to shift Red Cross policy for reasons that may have had more to do with her husband's political standing than the demands of health and safety programs [ref].

Marsha Evans resigned from the presidency in December of 2005. Although some critics claim that this is related to the Red Cross' Hurricane Katrina relief efforts, Evans cited difficulties in dealing with the Board of Governors. She had held the position since 2002.

The Red Cross' blood collection services have come under fire for violations of safety protocols for blood collection and storage. In 2001, the FDA filed a motion in federal court to publicize the Red Cross' failure to improve several specific deficiencies in the blood collection program, such as improper labeling and lack of inventory controls [ref]. The Red Cross claimed that all the FDA violations were simple bookkeeping errors, and that there is no danger to the nation's blood supply.

The Red Cross has also been criticized by gay rights groups who claim that some of their blood donation restrictions discriminate against gay men. Donors who have engaged in certain activities that put them at high risk for blood-borne diseases are restricted from donating for a certain period of time, or in some cases banned for life. Examples include getting a tattoo, living in Africa, using illegal drugs intravenously, or engaging in male-to-male sex. A man who has had a sex with another man after 1977 (or a woman who has had sex with a man who has had sex with a man) is banned from donating blood for life. In 2000, the issue was reviewed, but the Red Cross did not revise the ban [ref].

Some of the Red Cross' financial donors have been angered to find out that some of the money they donated was diverted to fund future relief efforts, instead of the disaster that prompted their donation. For example, about $200 million of the $1.1 billion collected in the aftermath of the 9/11 attacks was put aside to fund future relief efforts. Donor complaints resulted in the money being shifted back to 9/11 relief, the resignation of Red Cross president Bernadine Healy, and a promise of greater transparency in the agency's financial dealings in the future [ref]. Despite those efforts, complaints surfaced again in 2005, when funds donated for relief from Hurricane Katrina were not earmarked for long-term rebuilding (something for which Red Cross funds are not traditionally used).

Others complained that the Red Cross' relief efforts after Katrina were insufficient, poorly organized and targeted to white storm victims, while black victims didn't receive help for days. The Red Cross has refuted some of these claims here.

For more information about the American Red Cross, check out the links below.