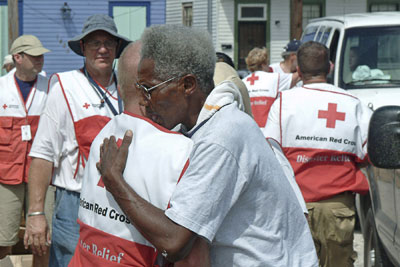 Many people know of the Red Cross primarily through its blood collection efforts. It collects and maintains about half of the United States blood supply from roughly 4 million donors [ref]. In 2001, this amounted to more than 7 million units of blood. Americans require about 39,000 units of blood every day because of accidents, surgery, illness or disease [ref]. The blood is used by all of the nation's hospitals and by the United States military.

Blood that has been collected by the Red Cross is carefully labeled and shipped to two different places: a component lab and a testing lab. The testing lab puts the blood through nine tests to make sure it is safe and free from transmissible diseases. The component lab separates the blood into red blood cells, platelets and plasma. Once the test results are received, the components are shipped to hospitals according to need.

Disaster relief is another major aspect of the Red Cross. Although the primary responsibility for dealing with disasters lies with local, state and federal governments, in the immediate aftermath of a disaster, the needs of victims can easily overwhelm the capabilities of government officials. The Red Cross strives to respond to any disaster or emergency incident within two hours of being notified, although this is not always possible because of hazardous conditions.

When the Red Cross arrives at the scene of a disaster, the first priority is to provide food, water, shelter and medical services. Medical services include first aid as well as treatment for certain ongoing conditions. For example, someone who needs dialysis or diabetes medication can get help from the Red Cross during a disaster. The Red Cross also provides mental health counseling to disaster victims, volunteers and rescuers. Mental health assistance is vital because anyone involved in a disaster sees and experiences things far beyond their normal lives, and it can be very difficult to deal with these experiences. The Red Cross has specially trained personnel with experience in disaster counseling.

Red Cross services also work to help people resume their lives in the wake of a disaster, giving them the tools to sustain themselves. This can include referrals, transportation or occupational tools. Finally, in situations where insurance and government help are not enough, the Red Cross can offer long-term help for rebuilding. All of these services are in addition to the logistics of housing, feeding and coordinating rescuers, medical personnel and victims. Using bulletin boards, Internet sites and other communications tools, the Red Cross also tries to reunite families that were separated in the midst of a disaster.

When there is a major disaster somewhere else in the world, such as the 2004 tsunami, the American Red Cross sends people and supplies to supplement the efforts of the other Red Cross and Red Crescent groups and works to coordinate relief from other national groups.

Aid to Soldiers and Victims of War

In times of war, the Red Cross fulfills the original goal of the International Red Cross movement -- to provide aid and comfort to soldiers and victims of war. This often takes the form of distributing care packages and keeping members of the armed forces in contact with family members.

The Red Cross impacts communities across the U.S. with its health and safety education programs. Through babysitter training courses, lifeguard training, CPR training and certification and HIV/AIDS education, they give people the tools to become lifesavers themselves. In addition, the Red Cross offers Workplace Training Courses in a variety of health and safety areas.

In the next section, we'll look at the history of the Red Cross.

The worst disaster that American Red Cross has dealt with in terms of loss of life was the hurricane that struck Galveston, Texas in 1900. Approximately 6,000 people were killed. The terrorist attack of Sept. 11, 2001 was the most expensive, costing almost $1 billion in aid. That disaster also brought 54,577 rescue workers into action. [Source: Red Cross FAQ]