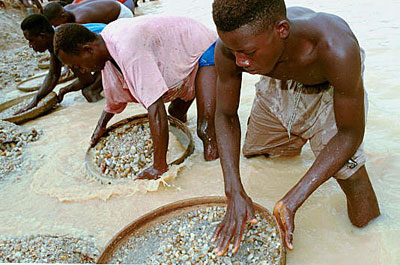 Workers pan for diamonds at a government-run mine in Sierra Leone. Al Qaeda is known to have made millions of dollars from the sale of diamonds mined illegally by the Revolutionary United Front (RUF) in Sierra Leone.
Chris Hondros/Getty Images

Experts claim that the illegal sale of blood diamonds has produced billions of dollars to fund civil wars and other conflicts in various African nations, including Sierra Leone (where conflict ended in 2002), Angola, Liberia, Ivory Coast and the Democratic Republic of Congo (DRC). Most of the time, the people behind these civil wars and rebellions oppose legitimate governments and desire control over the area's lucrative diamond industry.

For example, in Sierra Leone a group known as the Revolutionary United Front killed, threatened, and even cut off the arms of people living and working in diamond villages until they were able to take control of the mines in the area. Then the group moved on to the next village to do more of the same, effectively terrorizing the entirety of Sierra Leone, to the point that many people fled their homes in fear. All in all, roughly 20,000 innocent people suffered bodily mutilation, 75,000 were killed and 2 million fled Sierra Leone altogether [source: PBS Online NewsHour]. According to National Geographic News, all of these conflicts combined have displaced millions and resulted in the deaths of more than 4 million people.

In the 1990s, human rights organizations worked to bring these tales of genocide and greed to the forefront of human concern. In response, the Kimberley Process Certification Scheme (KCPS) was created in 2002 to regulate diamond trading and keep blood diamonds from entering the legitimate diamond market. The Kimberley Process was envisioned by the diamond industry and put into practice by the United Nations.

According to De Beers, more than 70 countries participate in the Kimberley Process, which requires the governments in these countries to ensure that all diamond shipments are exported in secure containers. In addition, each shipment must also have a specifically numbered and government-validated certificate that promises the shipment does not contain conflict diamonds. The countries must also agree to refuse any diamond shipments not containing an authentic Kimberley Process Certificate.

Proponents of the Kimberley Process claim that 99.8 percent of the world's diamonds are now legitimate and conflict-free. Critics, however, claim that the program doesn't prevent diamonds from being easily smuggled from war-torn countries to Kimberley Process countries and then passed off as legitimate. In fact, the United Nations and the United States government released reports as recently as 2006 stating that roughly $23 million worth of Ivory Coast diamonds were smuggled into trade and distributed as legitimate [source: National Geographic].

Although Africa supplies about 60 percent of the world's diamond supply, there are alternate sources [source: PBS NewsHour Extra]. First, remember that not all African diamond mines are corrupt. For example, the African nation Botswana has been able to thrive thanks to a successful diamond mining industry. As recently as 1999, it was considered the world's fastest-growing economy. In fact, three-quarters of Botswana's export profits and 45 percent of the country's government revenue are produced by diamonds. Thanks to a legitimate diamond industry, Botswana has enjoyed a complete about-face from one of the world's poorest countries in 1966 to the world's most rapidly growing economy over the last 25 years [source: Allafrica.com].

A miner works a diamond mine in Northwest Territories, Canada.
Stephen Ferry/Liaison/Getty Images

Canada also boasts an up-and-coming diamond industry, and many other countries around the world feature diamond mines.

To the dismay of the diamond industry, scientists around the world have been trying for more than 50 years to create real diamonds in a laboratory setting, hoping to end the need for naturally occurring diamonds. Although stones that pass as diamonds as far as their consistency and ability to cut other diamonds have been created from carbon rich substances, they are not yet considered gem quality. Instead, they are used for industrial purposes, such as diamond-tipped cutting tools.

How did we learn about the conflicts surrounding the African diamond trade? Find out about the surprising source of our understanding on the next page.

How to Avoid Purchasing a Blood Diamond

Although efforts have been taken to reduce the number of blood diamonds on the legitimate diamond market today, the practice of smuggling makes it impossible to completely eradicate them. To ensure that your diamond represents love and purity, rather than greed and hate, ask your jeweler the following questions before plunking down your hard-earned cash:

Experts agree that any reputable diamond dealer should be able to provide the necessary documentation to put your mind at ease. If they can't do that, simply take your business elsewhere. Experts also recommend purchasing diamonds from Australia and Canada, although there are legitimate diamond mines in Africa.