by Alia Hoyt
NEXT PAGE 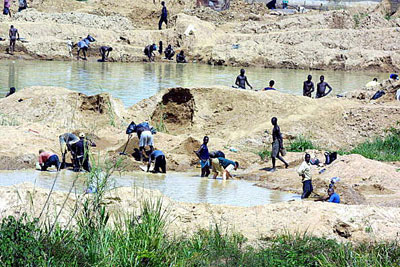 Few things elicit the response to the gift of a clear, perfect diamond -- particularly if given in that trademark Tiffany-blue box. Women clamor for them and men shell out thousands of dollars for engagement rings, pendants and the like. Friends compete to see who has the biggest and best diamond ring, only to be one-upped by the next friend to get engaged (if her fiancé knows what's good for ­him).

This phenomenon has its roots in marketing by the diamond industry -- ruled largely by the company De Beers -- and has reaped benefits for decades. In 2005, the diamond industry was estimated to be worth a whopping $60 billion [source: Blood Diamond Action]. Diamonds are judged on the Four Cs -- clarity, color, cut and carat weight.

­Critics wonder, however, if the same women who lust after these precious gems would feel the same if they knew about the fifth "C": conflict. Would they consider their rings to be worth the suffering, deaths and displacement of thousands of Africans? Known as blood diamonds or conflict diamonds, these gems are mined and exported illegally from certain parts of Africa by corrupt groups bent on funding bloody rebel conflicts and civil wars.

Before we get into the gruesome details of the corrupt African diamond trade, it's important to note two things. First, only a small percentage of the world's diamonds are known still to come from these particular regions of Africa. It's impossible to know if that statistic is truly accurate, because diamonds are very easy to smuggle out of these war-torn countries. Second, not all countries in Africa are home to corrupt diamond mining and trading.

To understand the African diamond trade, you have to know how and why diamonds are exploited in parts of Africa, as well as where this has been and continues to be a problem. You also might want to know how to avoid buying a conflict or blood diamond for your special someone, and what people are doing to eliminate this problem completely.

By the end of this story you may be tempted to find your diamond sales certificate to ensure that your token of undying love didn't contribute to the mayhem that has gripped parts of Africa for decades.

So how did the African diamond trade get its start, and who's trying to keep it under control? Find out more on the next page.