History of Diamonds in Africa 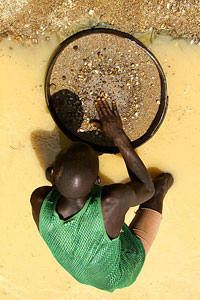 Since then, they have brought joy into the hearts of those who receive them and stress into the hearts of those who can't afford them. The irony of diamond desire is that it centers around the idea that diamonds are precious and rare. While diamonds may be precious gems, they aren't even a little bit rare. Mines in Africa, Canada and other countries abound with the stones, which are mined, cut and then marked way up to result in a huge profit.

However, De Beers, the powerhouse that controls about 60 percent of the diamond industry, has spent the last decades waging a stunning marketing campaign that continues to gain momentum. Desire for diamonds has never been greater and the industry continues to grow despite rising costs and concern over legitimacy. Despite the company's seeming monopoly on the world's diamonds, De Beers insists that their diamonds are 100 percent conflict-free [source: De Beers].

The World Diamond Council, formed in 2000 to combat illegal diamond trading in Africa, maintains that diamonds benefit the world in many ways other than just looking pretty. For example, roughly 10 million people worldwide are supported by the diamond industry. Also, revenue from the diamond industry is integral to the fight against HIV/AIDS in Africa.

What exactly are blood diamonds? Find out more on the next page.