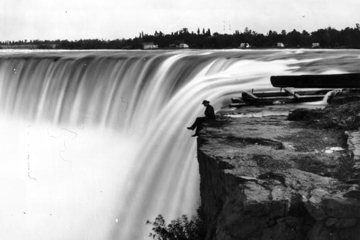 A view of Niagara Falls around the time when Charles Ulrich crossed the river just after a jail break.
Hulton Archive/Getty Images

Charles Ulrich had as much of a flair for attracting women as he had for creating flawless plates for printing counterfeit hundred-dollar bills. In the 1860s, the young Ulrich made a name for himself in New York City as a gifted engraver of plates used for counterfeiting hundred dollar bills. By the time he finally gave up a life of crime and confessed during an 1868 trial in Cincinnati (receiving 12 years in a federal penitentiary), Ulrich estimated he'd produced around $80,000 worth of phony bills, equal to nearly $1.3 million in 2008 dollars [source: New York Times, West Egg].

His incarceration following his Cincinnati trial was hardly his first. In the daring tradition of counterfeiters, Ulrich had escaped from prison several times. After one break from a New York prison, Ulrich led police on a chase into Canada. The counterfeiter managed to evade capture by crossing the Niagara River in a small boat and was nearly carried over the falls by the current.

Ultimately, Ulrich's downfall was his weakness for women. During his criminal youth, he romanced several women and lived as a polygamist, moving from one city to another and engaging in relationships without breaking off old ones. When he moved his wife to live with him, his girlfriend and another female friend, the women turned on him and gave him up to the police, resulting in his 1868 trial.