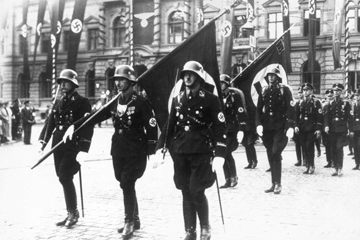 In addition to carrying out the genocide of Jews, Roma, Catholics, homosexuals and other unfairly marginalized groups, fighting the Allies in Europe, Africa and the Mediterranean and invading foreign nations, the Nazis also spent World War II counterfeiting.

The project was dubbed Operation Bernhard -- after Bernhard Kruger, the SS officer in charge of the project. The Nazis put concentration camp inmates with printing skills to work in the secret camp at Sachsenhausen producing counterfeit U.S. dollars and British pound notes. The Nazis forced the successful production of $650 million in pound notes, equal to about $7 billion in today's dollars [source: Malkin].

The Nazis weren't interested in making any big purchases; the motive behind Operation Bernhard was to introduce enough fake money into the British economy to undermine the inflation usually associated with a sudden influx of cash. Germany had similar plans for the American economy, but the Soviets invaded Berlin just after the forced laborers at Sachsenhausen mastered the counterfeit hundred-dollar bill.

In other words, the Nazis weren't so much caught as they were defeated in the war. The group's downfall put an end to its counterfeiting operation.