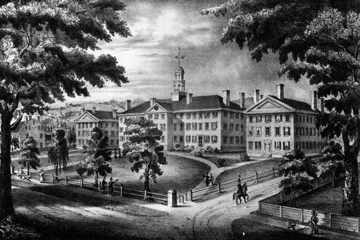 Dartmouth College in New Hampshire, circa 1819, the time and region Stephen Burroughs was busy making a name for himself as a legendary rogue.
MPI/Hulton Archive/Getty Images

Widely considered by historians as one of the most colorful characters of American history, Stephen Burroughs is also one of the least known -- despite writing and publishing a memoir that remains in print today.

Burroughs was born in New Hampshire in 1765 and was raised throughout the Northeastern United States. From an early age, he showed distinct signs of acute chicanery: When he stole several watermelons from a local farmer as a boy, he joined the search party assembled to find the thief. As he grew older, Burroughs' crimes became more serious.

He was posing as a minister and had led a congregation for six months when he was first arrested for passing counterfeit money in Springfield, Mass. Fearing an escape attempt, authorities soon moved him to a prison in Northampton, Mass. Not one to be caged, Burroughs set fire to the jail where he was imprisoned and escaped. After several more escapes and apprehensions by police, he finished out his prison term, moved to Canada -- and led a successful counterfeiting ring.

What's notable about Stephen Burroughs is that his criminal streak came with a solid reputation as a magnanimous citizen and humanitarian. He founded at least one library, served as a schoolteacher and retired from crime to tutor Canadian children from wealthy families. He died in 1840.