by Jane McGrath
Prev NEXT
8 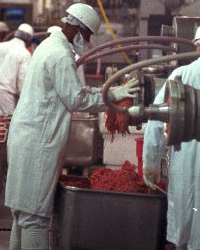 Employees process ground beef in a Hudson plant a few weeks before the company is sold to Tyson Foods.
AP Photo/Dennis Grundman

A year after the Odwalla apple juice outbreak, the nation was struggling with E. coli yet again. This time, it led to the largest meat recall ever seen at that point. In 1997, Hudson sold beef that was contaminated with E. coli, sickening at least 16 people, five of whom were hospitalized (luckily, none died) [source: Neusner].

On Aug. 12, the USDA ordered Hudson to recall 20 million pounds (more than 9 million kilograms) of their ground beef, making this one of few recalls on this list that weren't voluntary [source: Smith]. Soon, this number rose to 25 million pounds (more than 11 million kilograms). The most crippling effect was not direct recall costs, but the loss of Hudson's best customer, fast-food giant Burger King, on Aug. 23.

A few days later, Hudson sold the beef-processing plant that was the source of the outbreak. But, even without that plant, the company suffered from a tainted brand name. By early September, Tyson Foods offered to buy the company for $642.4 million -- much less than it was worth a year earlier [source: Neusner]. Though Hudson founders had previously turned down offers to sell, this time it was an offer they couldn't refuse.