by Jane McGrath
Prev NEXT
10

Jack in the Box Burgers 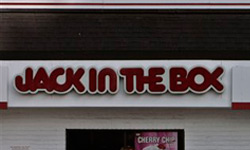 The death of children in Jack in the Box's E. coli outbreak taught the nation the importance of cooking hamburger meat thoroughly.
AP Photo/Ric Francis

This incident proved to be one of the most dramatic food-born­e illness outbreaks ever and awoke people to the danger of E. coli. The fast food restaurant chain Jack in the Box began selling hamburgers  contaminated with E. coli in 1992. Soon, hundreds were sick and four children succumbed to the illness and died.

This is especially tragic considering that it was so preventable. Even though the raw meat was contaminated, cooking it to a high enough temperature (155 degrees Fahrenheit or 68.3 degrees Celsius) would have killed the E. coli and made it safe to eat. However, the Food and Drug Administration (FDA) standards at this time only required the­ meat to be cooked to 140 degrees Fahrenheit (60 degrees Celsius). When this scandal proved that temperature was inadequate, the FDA raised the requirement to 155 degrees (and eventually 160 degrees or 71.1 degrees Celsius).

When the link to their hamburgers was discovered, the company that runs the restaurants, Foodmaker Inc., issued a recall in which they recovered about 20 percent of the tainted beef [source: MarlerClark]. Foodmaker lost approximately $160 million in sales and 30 percent of its stock market value as a result of the scandal [source: MarlerClark, Nestle]. They did offer to pay the victims' medical expenses with "no strings attached" [source: AP]. Nevertheless, they eventually paid out tens of millions in individual and class-action suits.