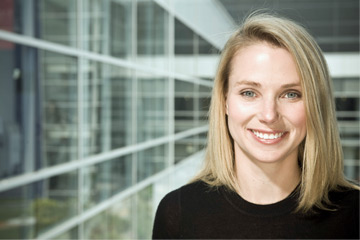 Is this the face that could ultimately affect your company's flexible working policy?
© Martin Klimek/ZUMA Press

It was the Memo from Hell, at least in the minds of many Yahoo employees. When workers from the beleaguered Internet giant opened up their e-mails on a February day in 2013, they saw a directive from Marissa Mayer, the company's CEO. The note, sent to employees by Jacqueline Reses, the head of Yahoo's human resources department, announced that employees could no longer work from home [sources: Swisher, Kotz]:

To become the absolute best place to work, communication and collaboration will be important, so we need to be working side-by-side. That is why it is critical that we are all present in our offices. ... Speed and quality are often sacrificed when we work from home. We need to be one Yahoo!, and that starts with physically being together.

Employees, the memo said, could still work from home in an emergency, but workers were urged to exercise their "best judgment in the spirit of collaboration" [source: Marcus].

Mayer's actions drew the wrath of many a pundit. They decried how it would harm Yahoo employees who rely on telecommuting to balance work and life issues. Boston.com's Kara Baskin said Mayer was "snobbish, one-dimensional, and out of touch." Ruth Marcus of The Washington Post intimated that Mayer was a fraud. On one hand, Mayer was telling her employees to get back to work in the office, while to make her life easier, she built at her own expense a nursery for her newborn adjacent to her office.

"How ironic that a technology company, dedicated to enabling connectivity, would enforce such a retrograde, back-to-the-assembly-line edict," Marcus opined.

The memo touched off a firestorm on cable news, the Internet and in the morning papers. It also spurred some copycats. Less than a week later, consumer electronics retailer Best Buy reined in its telecommuting policy considerably.

And so people began asking: Does working from home make an employee less productive? Is speed and quality sacrificed, as Mayer suggests, when employees telecommute? Let's find out.