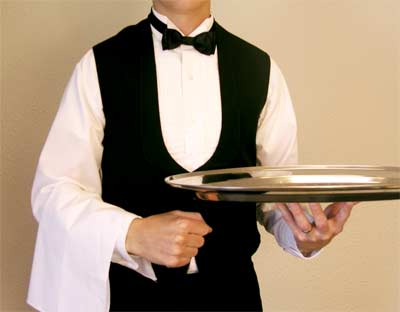 Tipped employees can be paid a direct wage less than the minimum wage if their tips make up the difference.
Photo courtesy Karl-Erik Bennion/stock.xchng

A commission is a sum of money given to an employee after completing a task, such as selling goods or services. A salesperson in a clothing store may earn commission based on a percentage of his sales. An insurance broker may earn a commission dependent upon how many policies she sells or for reaching a target number of policies sold.

Commissions provide incentives for workers to be productive, but they can cause some problems. For one thing, a policy of compensation by commission can create an intensely competitive atmosphere among workers, which may actually undermine the business by creating a hostile work environment. Another concern is when employees are paid entirely by commission and don’t draw a regular wage. Not only can this method be burdensome for the employees, but it causes them to not know how much they are going to be earning from month-to-month.

Severance pay is given to employees upon termination. If the termination process goes well, this can be something like a “farewell gift.” Frequently, we hear about these severance packages when large companies are forced to lay-off many employees after a major restructuring or a merger.

Severance pay is usually based on length of employment and terms set out in the employee’s initial contract. The FLSA doesn’t require employers to offer severance pay, but if you didn’t receive the severance package promised in your contract, the Employee Benefits Security Administration may be able to help.

Hazard pay is additional pay for performing dangerous or physically demanding work. It can involve work that is potentially life threatening, such as mining, or something that causes physical discomfort or stress such as working in extreme temperatures or frequent exposure to dust and other irritants. Members of the armed forces involved in combat operations are likely eligible for hazard pay. The amount or rate of hazard pay is usually based on the hardships involved and the amount of time workers spend exposed to those conditions.