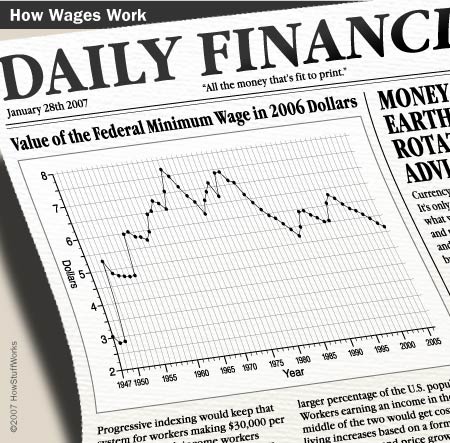 Sometimes getting paid isn’t as simple as drawing a salary or getting paid by the hour. Let’s look at some of the different types of pay.

Minimum wage is a frequent topic of debate. As of May 2007, the federal minimum wage stood at $5.15 an hour. For the average fulltime worker, that’s only $10,700 a year, which can make supporting oneself -- much less a family -- very difficult, especially in big cities where property values and rents are high. The inflation adjusted value of this minimum wage is the lowest amount in 50 years [ref]. Twenty-eight states do have a minimum wage greater than $5.15 an hour.

Although the minimum wage has not been raised since 1997, the Democratic leadership has promised a raise to $7.25 an hour over the next two years. Opponents of raising the minimum wage claim that it would cause unemployment by forcing small businesses to lay-off workers. Some economists disagree, while others, such as Harry Holzer of the Georgetown Public Policy Institute, claim that any rise in unemployment would be offset by other positive effects [ref].

Minimum wage laws still apply to salary workers. A salary employee’s regular rate cannot be less than the minimum wage and is calculated by dividing the salary by the number of hours for which the salary compensates. Here’s an example:

For information on the minimum wage in your state, check out the Department of Labor.

As long as an employee is at least 16 years old, there is no limit to how many hours an employer can require him or her to work, though overtime must be paid for all hours beyond 40 worked per week. Employees who earn a salary rather than an hourly wage and are either an executive, learned professional or a creative professional are exempt from overtime requirements. Outside sales employees, computer specialists earning at least $27.63 an hour, independent contractors, small farm employees and some others are also exempt. Overtime rules are also slightly different for police officers and fire fighters. Many states have passed legislation concerning overtime, so if you think you may be eligible for overtime pay, consult your state’s Department of Labor Web site.

The FLSA dictates that tipped employees can be paid a direct wage of $2.13 an hour on two conditions:

In the next section we'll look at special types of pay.