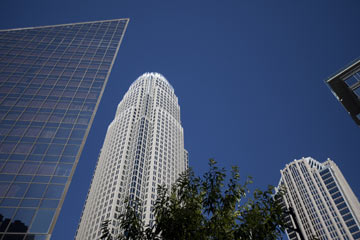 In 2012, the U.S. Dept. of Justice sued the Bank of America (headquarters pictured here) for $1 billion over a scheme to sell the government toxic mortgage loans. Want to learn more? Check out these Corporation Pictures.
John Adkisson/Getty Images

The U.S. Department of Justice (DOJ) has a message for businesses that try to cheat the government or scam its citizens: Get yourself a good lawyer. In 2012, the DOJ joined a whistleblower in suing Bank of America for a scheme to sell the government toxic mortgage loans [source: Stempel]. Over the previous year, the government sued 18 other banks over lousy loans that had triggered the housing collapse.

When one party sues another party, that's called a civil lawsuit. In most civil lawsuits, a plaintiff sues a defendant for damages resulting from the defendant's allegedly unlawful or negligent behavior. The U.S. federal government, just like any American citizen, has the right to sue in civil court. If the government, or one of its regulatory agencies, believes that a business has broken a federal law or attempted to cheat a federal agency out of money, it can take that business to court.

The DOJ, established in 1870, is the government's "lawyer." As such, the DOJ is responsible for overseeing all of the government's legal actions in both civil and criminal cases. In a criminal case, the government prosecutes an individual -- and in rare cases an entire organization -- for breaking federal law [source: Thompson]. If the judge or jury finds a criminal defendant guilty beyond a reasonable doubt, the punishment includes fines and possible imprisonment.

In a civil lawsuit, however, the government sues to recover compensatory and/or punitive damages. In this case, the defendant doesn't have to be proven guilty beyond a reasonable doubt, but only by a "preponderance of the evidence" [source: Newkirk]. In some cases, particularly where there are no direct witnesses or a smoking gun of sorts, civil trials are easier to prosecute than criminal cases.

No one goes to jail in a civil trial, but defendants found guilty will have to pay up. Compensatory damages compensate the government for monetary loss or injury. An example could be a government contractor billing twice for the same service. Punitive damages are levied on top of compensatory damages in cases where the defendant acted in an especially harmful, negligent or malicious way [source: LII]. In some cases, the DOJ initiates both civil and criminal proceedings against a business or its individual employees.

The federal government files its lawsuits in federal court. The suits are often the result of years of investigation by the DOJ, Securities Exchange Commission (SEC), or other federal regulatory agencies. In many cases, the regulators and the DOJ attempt to resolve issues with businesses outside of court before resorting to a federal case.

Keep reading to learn about two of the most common reasons why the U.S. government sues businesses: breaches of antitrust law and the False Claims Act.

The Antitrust Division of the U.S. Department of Justice is charged with promoting free and fair competition among American businesses. The Antitrust Division sues companies that violate civil antitrust laws, including those that forbid the merger of two companies that would constitute an unfair monopoly [source: Department of Justice]. As with other prosecutions, the Antirust Division must decide whether to pursue criminal convictions against organizations, collect civil damages or both.

The Antitrust Division enforces three major U.S. antitrust laws. The Sherman Antitrust Act hails from the trust-busting heyday of the 1890s, but the law is enforced exclusively by criminal prosecution, usually for allegations of price-fixing and bid-rigging. In both cases, two or more companies conspire to cheat consumers or businesses out of money by falsely raising the price of their goods or services. Convictions are a felony offense.

For civil lawsuits, the Antitrust Division turns to the Clayton Act, a 1914 law that prohibits mergers and acquisitions that will unfairly lessen competition [source: DOJ]. In recent decades, the DOJ has sued to block the mergers of major corporations like United Airlines and US Airways in 2001, software makers Microsoft and Intuit in 1995, and cellular phone carriers AT&T and T-Mobile in 2011.

The DOJ doesn't always win its lawsuits to block proposed mergers. In 2004, the DOJ sued to block the $11 billion merger of business software-makers Oracle and PeopleSoft. The companies fought the suit and won [source: Catan]. In other cases, the very act of filing a lawsuit is enough to derail merger deals, as was the case with AT&T and T-Mobile, which backed out the deal rather than engage in a potentially expensive fight.

The third major antitrust law is the Federal Trade Commission Act, which created the Federal Trade Commission (FTC) to enforce laws protecting consumers against fraudulent and deceptive business practices. The FTC's Bureau of Consumer Protection sues companies that break truth-in-advertising laws, flood inboxes with deceptive spam, or ignore the National Do Not Call Registry [source: FTC]. In 2012, for example, the FTC sued the Wyndham hotel chain for failing to protect its guests' credit card information during three data breaches in less than two years that compromised more than 600,000 accounts [source: Mills].

Now let's look at another way that the U.S. government can sue companies -- to protect itself and average citizens against fraud.

The False Claims Act, passed in 1863, is also known as the "Lincoln Law," because it was written by a Civil War-era Congress after being ripped off by profiteering Union contractors [source: DOJ]. The original law was crafted to punish contractors who knowingly submitted false invoices to the government for goods and services. The law was greatly expanded in 1986 to cover any number of fraud cases that directly or indirectly involve government interests. Since 1987, the federal government has recovered more than $40 billion through civil false claims lawsuits [source: TAF Education Fund].

False claims trials are essentially fraud cases. Under civil law, fraud can be difficult to prove, because it has many components:

In a criminal fraud case, on the other hand, the government only has to prove that the perpetrator tried to defraud the victim, regardless of whether he or she succeeded [source: ACFE].

Here are some examples of situations in which the U.S. government could sue in civil court for false claims:

A popular provision of the False Claims Act is something called qui tam, better known as the "whistleblower" law. A whistleblower is an employee of a company who comes forward with proof of the company's fraudulent activities. Under the qui tam provision, a whistleblower sues the company on behalf of the federal government [source: TAF Education Fund]. If the company is found guilty, both the whistleblower and the government receive damages.

In 2012, British drugmaker GlaxoSmithKline paid the U.S. government $3 billion in a combined criminal and civil case instigated by six whistleblowers [source: Thomas]. Also in 2012, the DOJ sued Bank of America thanks to information from a whistleblower who detailed how the bank lied about the risk of mortgages it sold to investors, including the government-owned Fannie Mae and Freddie Mac [source: Stempel].

For lots more information about lawsuits and legal controversies, check out the related HowStuffWorks articles on the next page.

The federal government includes many regulatory agencies that also have the authority to sue businesses for breaking or ignoring federal regulations. The Environmental Protection Agency, for example, sues businesses that break environmental laws. The Securities and Exchange Commission sues businesses and individuals for insider trading. And the Federal Trade Commission sues companies that scam struggling homeowners with bad foreclosure advice.

Author's Note: How can the U.S. government sue a business?

Human nature is sad, sad thing. It has been proven time and time again that if left to our own devices, we will lie, cheat, steal, and -- yes -- kill our way to wealth, success and fame, if we think we won't get caught. That's why functioning societies have laws, both criminal and civil, to not only discourage us from robbing and killing, but encourage us to treat each other honestly and fairly. There is a heated political argument over the economic costs of government regulation. Does regulation squelch risk-taking and innovation? Does compliance with regulations sap profits from companies that could be hiring more workers? Or do rules and regulations keep human nature in check, and prevent us from inflicting damage on each other -- economic and otherwise -- that doesn't appear on an earnings report?

9 of the Weirdest Lost-and-found Items in the World
What is stagflation and why is it so dangerous?
10 Boom Towns that Went Bust