U.S. Coins Display No Numerical Values — Not Even the Government Knows Why

by Chris Opfer Feb 11, 2016
Despite the many, many designs, a scant few United States coins incorporate their numerical value onto either face. Chuck Cross/EyeEm/Getty Images

Pity the poor penny. Those copper-colored one-cent pieces are so little valued that you can take them or leave them at about any convenience store counter. Even some panhandlers will toss them back at you after asking for change. Maybe that's why there's talk of discontinuing the coins altogether.

If the feds are going to scrap the cent, they may as well consider overhauling the entire U.S. coinage system. For one thing, the size of the coins currently in circulation doesn't correspond to their value. Dimes are smaller and lighter than nickels, despite being worth double the amount.

Most countries use common Arabic-derived numerals on at least one side of their coin currency to indicate value, but not the United States.
Levent Karabulut/EyeEm/Getty Images

And then there are those amounts. If you're in the United States, take a look at the change in your pocket and you'll see the coins are not stamped with a numeral indicating their denomination. Instead, the common coins currently in circulation use three different units to indicate their value. Coins worth one cent are colloquially called "pennies" and marked "One Cent"; our 10-cent coin, one-tenth of a dollar, goes by the name of a dime and is engraved with the word "One Dime"; and 25-cent pieces read "Quarter Dollar."

If you're a tourist or new transplant to the country, or if you're among part of the population with a degree of illiteracy, you're out of luck. For instance, the U.S. Embassy in Japan even addresses this specifically for those heading to the United States and confused by the coinage.

"We do not have any information available about why the United States has followed the general custom of displaying coin values in words instead of numbers," says the embassy page. "The United States Mint used numerical descriptions of the value on our coins from time to time since the establishment of our coinage system in 1792. However, this has been the exception and not the rule."

No one contacted for this article seems to know definitively why most U.S. coins don't feature number values, a quirk that probably leaves non-English speakers with a handful of hard to identify change.

The best guess is that it has something to do with tradition, and the process in which the country's currency is designed. There was a time when coin values corresponded to the value of the metal used to produce them. Quarters and dimes were mostly silver, pennies were copper and nickels were comprised of, yes, nickel. That all changed in 1965, when the rising cost of silver forced Uncle Sam to move a copper-nickel combination.

The current one-dollar coin is the rare American coin that displays its value with a numeral, albeit in relatively small print.
Don Cardona/Getty Images

"I think that when they made the transition in the 1960s and were all of a sudden taking the silver out of coinage, they wanted to preserve the tradition," says Scott Schechter, a coin evaluator and vice president of Numismatic Guaranty Corporation. "I think that's why so many of our coin designs have never changed. They've stayed identical to when they had intrinsic metal value."

Federal law dictates how coins are designed and made with specific detail. That includes particular requirements about the size, weight, thickness and metallic composition of coin currency. The law requires that certain words or phrases — like "Liberty," "E Pluribus Unum" and "In God We Trust" — be engraved on each coin. It also gives Congress and the president the ultimate authority to approving any new designs through legislation.

"The legislation dictates a lot of what ends up on a coin," Schechter says. "It can be really constraining."

The law doesn't say anything about a ban on denomination numerals or a preference that denominations be spelled out in words. The one-dollar coins currently in circulation come stamped with a noticeable "$1." Still, Schechter says that all the other stuff legally required to be displayed on American coins leaves little extra room, even for a helpful little number.

Now That's Interesting
The U.S. could make about $4.4 billion by discontinuing one dollar bills in favor of dollar coins, according to the Government Accountability Office.

Be an Impoverished Artist for the Night 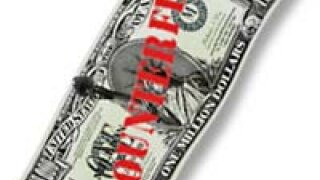 Why Doesn't Paper Money Disintegrate In The Washing Machine? [VIDEO] 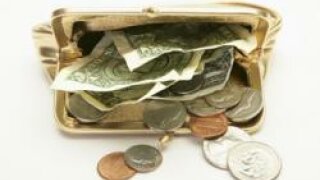