Toy Testing in the Digital Age 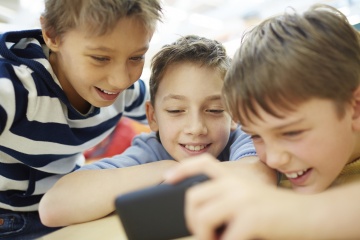 Changing technology means there are tons of games and apps out there for kids to test.
shironosov/iStock/Thinkstock

Classic toys like stuffed animals, tricycles and alphabet blocks are still going strong, but as any modern parent knows, there's a whole new frontier of digital playthings on the market now. And the information-age toymakers are eager to ensure their products meet kids' expectations.

In California, where the latest gadgets and apps spill forth at a frantic pace, a 9-year-old kid named Elliot Cowan headhunted some friends and hired them out as product testing consultants. Elliot and his friends charge toy companies a minimum of $300 a session plus the brand new toys and games they play with. Cowan's team is in hot demand as they kick the tires on everything from prototype karaoke apps to animation programs.

Along the same lines, a digital start-up called Launchpad Toys holds weekly testing sessions at the San Francisco Children's Creativity Museum. The turnaround is lightning fast — if the kids find a flaw in a product, the company can correct it and bring the app back for more testing the next week [source: Dotson].

But kids aren't the only toy testers who are turning into stars in the digital age. We mentioned EvanTubeHD, but another YouTube channel called DisneyCollectorBR isn't just popular, it's a phenomenon.

With as many as 55 million views in a single week, the channel is consistently in the site's top 10list, and in the U.S. has come in ahead of massive celebrities like Shakira and Katy Perry [source: Cohen]. This is jaw-dropping considering that the site consists of nothing more than an anonymous woman opening toys, one after the other. All you can see are her creatively manicured hands unpacking items like Angry Birds egg surprises and Cookie Monster figures.

It doesn't get any simpler, but somehow the format is a massive success. It's estimated that the unknown woman earns as much as $13 million a year in ad revenue! Her main audience? Toddlers [source: Reinsberg]. It makes Riley's job sound downright old-fashioned — not to mention underpaid.

But if one thing is clear, it's that when it comes to toy testing, the job descriptions and rewards are as varied as the world of toys itself.

My son turned 4 the other day, and the sudden influx of new toys has caused all the organizing bins and boxes to overflow. While it's tempting to think of getting free toys in exchange for testing them out, my first thought is: Where would we put them all? Donating to charities is a great option, of course, but what if the toys are broken? I'm waiting for a line of biodegradable toys I could throw in the compost after they've lost half their wheels and the novelty appeal has worn off (i.e., after a week). Now that's something I'd be happy to test!