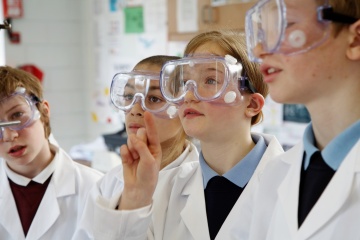 Companies and organizations exist to test the safety of toys before kids get their hands on them.
Ableimages/Digital Vision/Thinkstock

Regulatory bodies update safety standards all the time, and year by year, the regulations become more stringent as we learn about the dangers of substances like phthalates, which are commonly found in plastic. Add to this the fact that different jurisdictions have different standards, and it's no wonder toy manufacturers often outsource safety testing to specialists.

Companies like Intertek, for instance, have dedicated laboratories where trained technicians evaluate playthings in what is essentially a torture chamber for toys. They try to yank out their little eyes, rip them apart at the seams and light them on fire. The standards in Britain, for instance, demand that a toy burn at a rate no faster than 1 inch per second. This is supposed to give kids enough time to note the fire and run [source: Doughty].

By the time they're done with a given toy, a certified lab will have tested to make sure it can be deemed safe according to all of the major safety regulations, including the American CPSIA (Consumer Product Safety Improvement Act), the EU Toy Directive and China's GB 6675 [source: Intertek].

Once a plaything has jumped through those hoops, the toy can then proceed to round two. The object itself might be safe, but will kids actually play with it? In addition to toy companies, there are several independent consumer groups and not-for-profit organizations dedicated to finding out.

Using a variety of methods that we'll talk about on the next page, the companies or organizations round up some likely youngsters and let them loose. As the kids play, trained observers keep a close record of the session. For instance, The Noise on Toys, which calls itself "An independent consumer guide to the 'bestest' kid-tested toys," scores toys according to six criteria: play value, cost value, design, quality, parent appeal and safety.

Read on to find out how one toy tester earned millions of fans.

Medical professionals sometimes use toys to test patients. In The Tinker Toy Test, for instance, subjects are given a standard set of 50 Tinker toys and then asked to build something. They can take as long as they like, and when they're done, the administrator scores the results. The score is used to evaluate the subject, often a person suffering from a neurodegenerative disease or head trauma, and how he or she plans and executes tasks [source: Bayless].