The Politics and Economics of Squatters' Rights 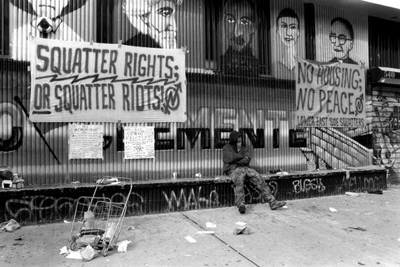 Politics were at the fore of the "Battle for 13th Street" in New York. Hundreds of squatters had inhabited government-owned buildings for 12 years, but were forcibly removed by police in 1995.
Carolyn Schaefer/Getty Images

The concept of granting rights to a person who takes over property that isn't his or hers could make some capitalists' heads spin. But in socialist countries and nations with strong socialist parties, squatting can be used as a means to solve homelessness. Squatting can be a political statement that emphasizes the gap between the wealthy and the poor.

Rhino is one group that formed to protest rising costs in real estate. At its peak in the mid-1990s, this Swiss group took over 150 empty apartment buildings in Geneva. As urban renewal took hold in the city, the number of squats (residences inhabited by squatters) dwindled to about 27 buildings by 2007 [source: Tribune de Geneve].

That same year in Denmark, police clashed with protesters after evicting "left wing activists" from a Copenhagen youth center. The police were acting on an eviction order, removing the squatters from the building, which they had occupied since 1982 [Herald Sun].

Squatters in London made a statement about the gap between rich and poor when they took over a house for 10 days in the summer of 2001. The $3 million (1.5 million pound) house belonged to wealthy British economist Gavyn Davies. During the mass eviction on the 10th day, one squatter said, "I don't feel guilty about this at all, because this guy's rich" [source: The Telegraph].

Some economists are perhaps lesser targets for anarchists, socialists and squatters in general. Peruvian economist Hernando de Soto devised a "wealth-creation roadmap" specifically for post-Soviet nations struggling with the transition from communism to a free market economy. Part of that roadmap involves squatting. De Soto's idea is to formally register the dwellings of the rural poor, essentially granting squatters rights to their homes. By granting these rights, the poor would receive legal documentation of tenantship, which would help open doors to lines of credit. Theoretically, this would build wealth for the nation as a whole. The unrecognized Eurasian country of Pridnestrovie is adopting de Soto's plans [source: Tiraspol Times].

Organizations have sprung up that use squatting to further a political agenda. The group Homes Not Jails (HNJ) has chapters in Washington, D.C., Boston and San Francisco. HNJ's goal is to end homelessness and put a stop to what they perceive as a policy of jailing the homeless. To bring attention to the issue of homelessness, the group identifies abandoned and unused buildings throughout the three cities. During publicized media events, HNJ moves groups of homeless into the dwellings. This social experiment provides exposure to a major social problem while also finding shelter for the cities' displaced [source: Homes Not Jails].

For more information on squatting and other related topics, visit the next page.