Squatting and the Law 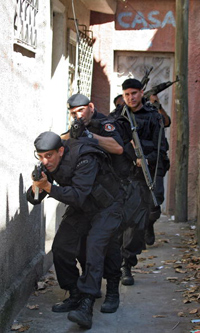 Members of Brazil's Militarized Police patrol an alley in the squatter village of Cidade Alta (known as the "City of God") in Rio de Janeiro in 2007.
Antonia Scorza/AFP/Getty Images

Squatting can take a variety of forms. The poor have long established squatters' camps, called shantytowns, on unattended plots of land. Brazil's famous City of God (or "Cidade Alta"), has become a fortified squatter village. Many of the 20,000 residents engage in firefights against the police and military to hold their ground against being rousted from the land [source: Observer].

On a larger scale, entire nations have been built by squatters. Both the United States and Australia were founded by people who moved in on land already occupied by other people. The squatting continued to spread from one coast to the other until the original inhabitants had been subdued.

The San Francisco Tenants Union points out a squatter's two major problems: He or she isn't putting any money down for the pad and is living in the house without any permission from the owner. The union says these obstacles are tough, but overcoming them is possible. Squatters can compensate the owner in other ways than paying rent, such as doing maintenance on the dwelling. And even if there's no contractual agreement between a squatter and a property owner, other unwritten agreements can serve as a type of lease -- or at least, an acknowledgment of the dweller. A landlord who is aware of squatters living in a house and does nothing to get rid of them may be viewed as implicitly agreeing with their presence [source: SFTU].

The key to squatting successfully lies in the tenant's rights. States grant rights to people who live in a home but do not own it. This protects tenants from being kicked out without notice from a landlord. In most states, tenant rights are extended to anyone living in a home for period of time -- usually 30 days. Squatters exploit these rights to stay in a home as long as possible. By setting up housekeeping, like making repairs, adding some curtains, and settling into the home in a generally respectable manner, the appearance of tenants' rights can be established.

In time, squatters can actually earn ownership of the dwelling. There's a legal precedent in most of the United States called adverse possession. This doctrine says that if a squatter lives "openly, continuously and hostilely" in a home for a prescribed number of years, he or she can become the owner. This applies to property that's vacant and where property taxes aren't being paid. The three criteria that must be met are making no attempts to hide the inhabitation (open), living in the dwelling continuously and without permission (hostile). If the squatter pays property taxes on the home, when the time limit is reached, he or she is considered the owner.

The time requirement before ownership through adverse possession kicks in varies from state to state. In California it's five years; in Texas it's 30 [source: Bruss]. In West Virginia, open dominion must be held over the property for 10 years [source: State of West Virginia]. But ultimately, adverse possession can result in a squatter owning the house. Talk about a successful squat.

Squatting isn't a one, two, three concept. There are challenges to taking over a house at every turn. Read about the squatter's dilemma on the next page.