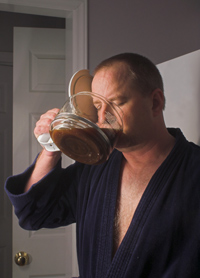 So you've got a squatter. What do you do now? Why is he here? Find out in this article.
©Robeo/Dreamstime.com

After three long months away, you're finally home. It was a rough trip, but now you're at your front door. You open the door and take a step inside. Something's wrong. The lights are on, but you don't have a timer rigged up. There's a bag of chips open on the coffee table and a bath towel draped over the back of th­e armchair. You're hit with a jolt of adrenaline -- a burglar's been in your home. Before you can react, a guy wanders into the room. He's wearing your robe. "Who are you?" he asks.

You scan the apartment. Yes, this is your place. Your stuff's all here, but it's being used by someone else. Friend, you've got yourself a squatter.

­Squatting is a pretty simple concept. It's setting up camp on a parcel of land or moving into an abandoned or unused dwelling. (However, moving into a house that has a family still living there is considered home invasion, not squatting.)

There are a number of different situations that can give rise to squatting. The poverty-stricken commonly build shantytowns on property that doesn't belong to them. The homeless may take refuge in an abandoned home for a few nights -- or years. Some people use squatting to make a political statement about the economic gap between the rich and poor. To others, squatting simply represents a way to buck authority. Even a houseguest who won't leave and a tenant who continues to stay past the expiration date of a lease both qualify as squatters.

Squatters who take over land or dwellings have the law to contend with. Since the establishment of property rights in the U.S. (which were founded around the time the nation formed), disputes over squatting have favored the landowner. But there are plenty of legal loopholes that squatters can take advantage of to help him or her take ownership of a property.

The life of a squatter is fraught with pitfalls and confrontations at each turn -- and so is the life of the landlord who has to deal with the unwanted resident. There are concurrent laws that give rights to squatters as well as provide a process for landowners to get rid of them. So how exactly does squatting work? Find out on the next page.