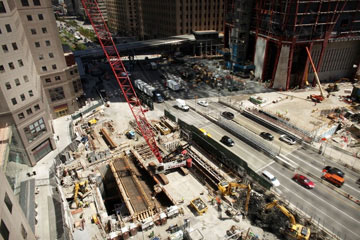 Construction continues at Ground Zero, the site of the former World Trade Center in New York City, in May 2011.
Spencer Platt/Getty Images

The terrorist attacks of Sept. 11, 2001, were horrifying and tragic. For thousands of family and friends of the attack's victims, the loss created a void that can never really be filled. The human tragedy of it is immeasurable. Yet there is another cost, the kind we are accustomed to measuring: the economic cost.

Although we can quantify the economic impact of an event like 9/11, it's hard to settle on one particular number. For one thing, different studies produce conflicting results. For another, there's little consensus on what "counts" as a direct cost of the attack. Certainly the insurance cost (an estimated $40 billion) counts, as does the cost of rebuilding the World Trade Center into the new National September 11 Memorial and Museum (roughly $700 million) [source: Makinen]. When you start getting into business losses, however, the numbers get a bit fuzzy.

Quarterly profits in the airline industry fell $25 billion (or about $100 billion annually) in the years following the attacks before profits gradually rebounded [source: Makinen]. Several airlines went bankrupt before that happened, despite generous loans from the U.S. government [source: Ackman]. The financial effect on New York City was put at a loss of gross city product (a measure of the size of the city's economy) totaling $23.7 billion through the end of 2002, with tax losses adding another $2 billion [source: Makinen]. An estimated 100,000 jobs were lost in Manhattan alone, and 18,000 businesses were destroyed, disrupted or forced to relocate.

Like a huge stone thrown into a lake, the ripples of the attacks spread out and reached every aspect of the U.S. economy. It was initially estimated that the U.S. would lose 1.8 million jobs because of the attacks, trimming as much as 5 percent, or $500 billion, from the gross domestic product [source: Templeton and Lumley]. Other studies provide lower estimates [source: NBC Los Angeles]. It's very difficult to get a handle on these large-scale losses, however, because the economy was already in a recession before the attacks. It's impossible to know which losses were due to the attacks and which were just a natural part of an economic downturn. Other losses occurred because security concerns raised the price of oil and may have affected the flow of investment dollars into the U.S. [source: Wolk].

Once we start discussing indirect economic effects, the numbers become staggering. Since the attacks, $1 trillion has been spent on national security [source: The Economist]. That does not count the wars in Afghanistan and Iraq. The two wars add another $1 trillion in costs and counting [source: Wolf].

There are countless other costs, such as government settlements to first responders, security and legal costs for terror trials, increased energy costs, loss of time due to airport security, and more. And we haven't even begun tabulating "opportunity loss" costs based on the things we didn't get to spend that money on because it was used on 9/11-related things instead. It's virtually impossible to put a single, final number on the economic impact of 9/11, but it's surely in the trillions of dollars.

For more information on the effects of the 9/11 attacks, see the links on the next page.