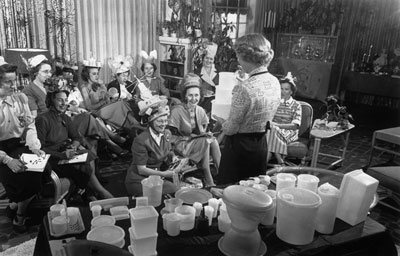 Women, some with products on their heads, attend a Tupperware party in 1950. Tupperware is one of the many successful companies that uses multi-level marketing techniques.
Hulton Archive/Getty Images

Multi-level market (MLM) or network marketing is an American institution. Companies like Amway, Tupperware, Herbalife, Avon, Mary Kay and The Pampered Chef support huge networks of distributors and recruits who sell every type of product from dietary supplements to kitchenware to beauty products. Salespeople are called independent business owners (IBO) and generally work from their homes.

On the surface, it's hard to tell the difference between a legitimate MLM and a pyramid scheme. That's because they're both built on the business model of "multiple levels" of distributors and recruits. Some critics of MLMs claim that all of them, even the supposedly "legitimate" ones, are pyramid schemes in disguise.

In a landmark 1979 ruling, the Federal Trade Commission found that Amway was not a pyramid scheme. That ruling has paved the way for hundreds of MLMs to follow Amway's business model. The Amway Web site highlights the differences between its unique "business opportunity" and a pyramid scheme:

Now let's look at some of the most famous pyramid scheme scams from the past and present.