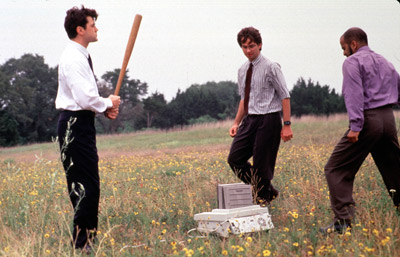 In this scene from "Office Space," employees destroy company property. Could this be an act of self-sabotage to avoid a promotion?

Perhaps the best way to address the Peter Principle in a corporation would be to institute a policy of demoting employees -- without the stigma of failure -- to their most appropriate level of work competence. If an employee isn't working out in a higher position, allowing him to go back to whatever position he excelled in would avoid the effects of the principle. This would, however, require the supervisor who made the poor promotion decision to admit he made a mistake, an act not often found in the higher levels of a hierarchy.

Another solution to the Peter Principle calls for higher pay without promotions. Employees often accept a promotion -- not for the power and prestige -- but the increased pay attached to it. If companies were willing to offer large pay increases for excellent work within the same position, the Peter Principle would be averted, and the employee could make more money while staying in the position he enjoys and in which he's competent.

Perhaps the most important factor in avoiding the Peter Principle is an alert employee, one who is aware of the extent of his capabilities. The offer of a promotion is tempting, but the employee must consider the extra responsibilities and jobs that come with it. Of course, the employee can simply turn down a promotion if he feels it's beyond his capability, an action Peter referred to as Peter's Parry.

Outsmarting an employer is another option. The employee who knows his limits has a fail-safe from being promoted to his level of incompetence: self-sabotage. Peter terms this as "creative incompetence." He advises the employee who is happy in his current position to take steps to make himself appear less desirable for a place in the ranks above him. Subtly painting your personal life as morally questionable, wearing too much perfume or cologne and parking in the company president's reserved space from time to time are all examples Peter gives of this method [source: Time].

You just have to make sure that your efforts to sabotage your chances for a bad promotion don't get you fired from your current position.

For more information on the Peter Principle, including related articles, visit the next page.