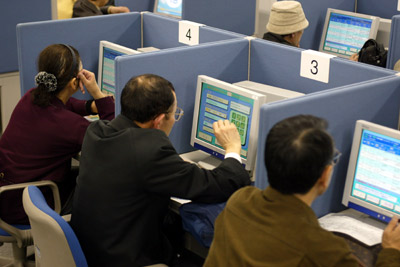 Edward P. Lazear poses the theory that employees work harder than normal to get a promotion, and then relax once the promotion is attained.
Koichi Kamoshida/Getty Images

Dr. Peter's principle is weighted slightly in favor of the regular employees. Another explanation -- one put forth by Edward P. Lazear, a theorist at Stanford University's graduate business school -- takes the blame largely off management's shoulders and places it on the employees.'

In his article, "The Peter Principle: A Theory of Decline," Lazear states that some cunning employees manipulate the reward system to get a promotion. An employee with his eyes on the prize of a bigger paycheck, higher status and a corner office will work his tail off to get a promotion. After the requisite amount of time working tirelessly, the employee will most likely receive the promotion he seeks. Once the goal is attained, the employee gives himself a break, taking time to relax after a period of intense productivity [source: Lazear].

From an outsider's view of the employee's work history, it appears that the promotion was the trigger for a decline in work, when all the while, the productivity being demonstrated before the promotion was actually artificial. In Lazear's view, it's not incompetence that's the eventual result of promotions, but an employee's desire to work less that's to blame for less productivity in his new, elevated position.

This is also seen in human courtship rituals. When a man finds a potential mate, he'll spend more time and energy on making himself appear attractive and interesting. When a commitment is reached, the amount of time and energy spent on these pursuits inevitably declines, what some refer to as "letting yourself go."

This notion is reflected in another theory, one posed before the Peter Principle by the English historian C. Northcote Parkinson in The Economist magazine in 1955. Parkinson's first law states that "work expands so as to fill the time available for its completion." Like the Peter Principle and Murphy's Law, Parkinson's Law is a tongue-in-cheek revelation of what may be a universal truth. In this case, that employees tend put off until tomorrow what can be done today.

There are, however, ways around the Peter Principle. In the next section, we'll take a look at some clever and not-so-clever solutions.

The technology boom that began in the early 1990s produced a new business model, the start-up company -- a type of company put together quickly with minimal cost and size. But time has shown that the Peter Principle can still apply to even these new companies.

In his essay, "The Peter Principle of Innovation," Nitin Borwankar applies the Peter Principle to innovation. He proposes that a young company has room to innovate, producing new ideas and advancing old ones. However, when one of the innovations is a success, all of the company's energy and resources become attached to that particular model. At that point, innovation turns stagnant and homogeneous. This is the innovation equivalent of a promotion to the level of incompetence.

Those in the company who desire to continue to innovate may leave, start their own company, and begin relentlessly innovating again, carrying on the cycle of innovation and stagnation.