What is the work opportunity tax credit?

Browse the article What is the work opportunity tax credit? 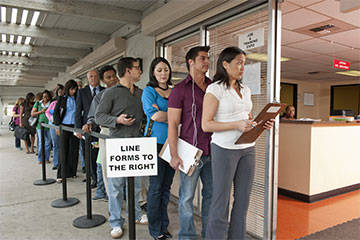 Job hunting is hard. It's even harder if you are an ex-felon or on public assistance. The work opportunity tax credit encourages businesses to give people like these a shot.
Yellow Dog Productions/Getty Images

Finding employment can be a full-time job itself, and for veterans, ex-felons, recipients of public assistance, people with disabilities and residents of economically depressed areas, the struggle has been historically greater. The work opportunity tax credit (WOTC) is a federal incentive program that encourages businesses to hire people in these groups. The credit is usually equivalent to either 25 or 40 percent of an employee's first-year salary. The exact amount depends upon the worker's classification and number of hours worked.

WOTC legislation expired at the end of December 2013. It hasn't been renewed as of fall 2014, but the U.S. Dept. of Labor encourages employers to continue submitting the appropriate paperwork to the Internal Revenue Service. In the past, Congress has renewed the program and applied tax credits retroactively, so the DOL wants businesses to be prepared if this pattern continues [source: U.S. Department of Labor].

One targeted hiring group is unemployed veterans who served on active duty for more than 180 days or had their time cut short due to a service-related disability. Another is felons who find work within a year of being convicted or released. People aged 18 to 39 who live in rural areas that had declining population during the 1990s are included in the legislation, as are job seekers living in what are euphemistically referred to as "empowerment zones," or financially distressed areas.

Businesses also receive WOTC after hiring workers enrolled in the Temporary Assistance for Needy Families (TANF) program, which promotes financial independence, two-parent families and at-home childcare[b]. What is the work opportunity tax credit? Food stamp recipients from ages 18 to 39 and people with disabilities who receive Supplemental Security Income -- or are enrolled in certain state or federal rehabilitative programs -- are also included.

For an employer, applying for the tax credit is relatively simple. The business needs to submit completed IRS and Department of Labor forms to its state workforce agency within 28 days of an eligible hire. Employers can hire as many of these workers as they'd like, and they earn credits of up to $9,600 for each. WOTC is responsible for lots of hires and lots of business tax credits -- to the tune of over $1 billion every year the program has been in effect [source: United States Department of Labor].