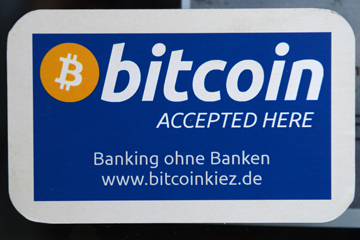 A bar in Berlin posts a sign that it accepts bitcoin. A growing number of businesses (albeit still small) are accepting bitcoin for transactions. See our virtual reality pictures.
© Jens Kalaene/dpa/Corbis

Virtual currency can be really profitable. As of Dec. 31, 2012, there were 9.6 million active users of "World of Warcraft," a massively multiplayer online role-playing game (MMORPG) in which players can earn virtual "gold" that can be exchanged for virtual goods like suits of armor and magic potions. Using third-party currency exchanges, some "World of Warcraft" users buy and sell virtual goods and gold using real U.S. dollars. In "Second Life," another popular MMORPG, players paid each other $150 million worth of Linden dollars, the game's virtual currency, in the third quarter of 2010 alone [source: GAO]. The question is, if people are making real income from virtual currency, should the Internal Revenue Service (IRS) be able to tax it?

It all started in 2001 when economist Edward Castronova published an analysis of the burgeoning virtual economy of online game worlds, which he calculated to have a gross domestic product of about $135 million. It gained national attention in early 2006 when writer and gamer Julian Dibbell posed a fascinating question -- are my virtual assets taxable? -- and put his money where his mouth his: Dibbell sold a collection of his own virtual assets from the MMORPG "Ultima Online" on eBay and reported the income to the IRS [source: Dibbell].

Dibbell claimed income in the amount of $11,000 earned from the sale of assets that don't actually exist in any concrete way. But the more intriguing part came next: After filing with the IRS, he tried to find out from various IRS employees if he was supposed to claim his castles and gold and other online assets that he hadn't converted to real-world dollars -- items that had never left the virtual world of "Ultima Online." Some of the IRS representatives found the question amusing; others gave it serious thought and could not offer Dibbell a definite response.

Dibbell's story and other reports of people making their living auctioning off "World of Warcraft" and "EverQuest" characters and assets for real money spread like wildfire through online news sites and the blogosphere. And now, the once-laughable question of taxing virtual transactions that never even leave the virtual world has landed right in middle of a real-life, real-money tax debate. Where does the virtual economy meet the real-world one? And gamers with a theoretical treasure trove of online assets aren't chuckling anymore. The U.S. Congress is actually looking into the taxability of Mighty Rage Potion and Shrouds of Provocation.

The issue of taxing virtual assets is a complicated one, but the primary point of justification offered by many economists, even if they're only talking "in theory," is the fact that these virtual assets have an established real-world value. When gamers started selling their virtual armor and horses and castles for real-world cash, they established an exchange rate. For instance, if we know what a suit of armor sells for in "EverQuest" or "World of Warcraft" gold, and we know what the same type of suit of armor sells for on eBay in U.S. dollars, we have a way to establish an exchange rate between game dollars and U.S. dollars. And theoretically speaking, for tax purposes, anything that has a real dollar value is taxable once it changes hands. So if you sell a suit of armor to another player for a certain amount of gold, it's possible for the IRS to tax that transaction as income earned in the converted U.S. dollar amount of that gold. The MMORPG "Second Life" has established the exchange rate of Linden dollars to U.S. dollars within the game world itself. In August 2013, one U.S. dollar bought 253 Linden dollars.

In 2007, the IRS began to seriously assess the risk of losing tax revenue to unreported virtual income. The issue of taxing virtual currency drew the attention of the Congressional Joint Economic Committee, which asked the Government Accountability Office (GAO) to make recommendations to the IRS on how to proceed. We'll take a look at the GAO's recommendations on the next page. 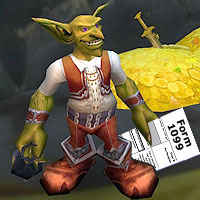