What Is the Tax Rate for Lottery Winnings? 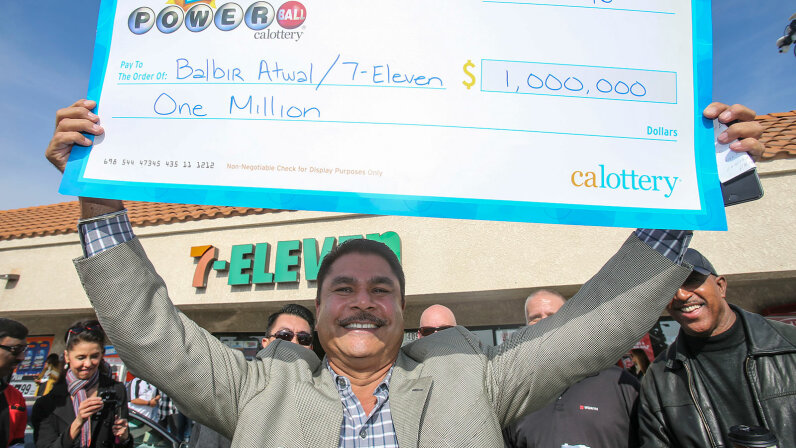 Balbir Atwal, owner of the California 7-Eleven that sold one of the three Powerball winning tickets, holds up a $1 million check he received from the California State Lottery. The 2016 jackpot was a record-breaking $1.58 billion. Ringo Chiu/Getty Images

Ah yes, winning the lottery. It's a dream for all of us. Mega Millions, Powerball, Lotto. So many games. So many losers. But, if on the off chance you do win millions in a lottery jackpot, keep in mind that the Internal Revenue Service will be looking for its fair share.

While you don't have to report lottery winnings of $600 or less, if you win more than $5,000, the government will hit you with a 24 percent federal withholding tax. Win $500,000 or more for a single person or $600,000 for a couple and the tax rate jumps to, gulp, 37 percent. Still, this is lower than the previous rate of 39.8 percent, thanks to the new tax law changes signed by President Donald Trump in 2017 [sources: Salisbury, Garztman]

And that's not all. Your state department of revenue services will also be looking for their take. Woe to anyone who wins the big-buck lottery in New York. You'll get slapped with an 8.82 percent tax rate. If you live in New York City, add another 3.88 percent on all income over $500,000 [sources: Tax Foundation, Zacks].

However, states with no state income tax, like Florida and Texas, will not tax your lottery winnings. And three other states that do have state taxes (California, New Hampshire and Tennessee) don't tax state lottery winnings [source: Porter]. Most states won't charge non-residents state taxes on their lottery winnings, with the exception of Arizona and Maryland, according to TaxAct. If you live in Arizona, you'll be slammed with a 5 percent tax on the prize, while nonresidents will have to dole out 6 percent [source: Ellis].

So before you spend all your winnings, remember that some of that cash belongs to Uncle Sam and choose wisely where you play.