How are taxes affected if you move to a different state during the year? 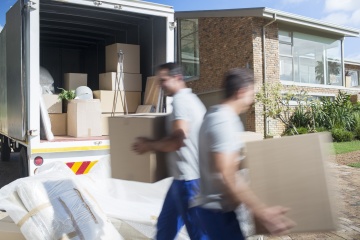 Not very many people can relax when moving to a different state. Between hunting for real estate, packing, transporting and unpacking, a big move can be one of the most stressful times in a person's life. But by the time tax season rolls around, there's no reason to let the panic return. If you moved to a different state in the middle of the tax year, you're not going to get penalized or overloaded with paperwork. In fact, here's some good news: Your federal tax return won't even be affected.

See? No panic necessary. And although it might seem intimidating to learn that you'll be required to file returns in two different states, there's no reason to find the process daunting. You just need to know the rules of each state, and we'll walk you through what you should be looking for.

First, make sure that each state you lived in collects a state income tax. Several states don't, and that means any income earned in these states doesn't have to be reported on a state return. If you're not lucky enough to live in one of those states, your next step is to get the right form to declare your income. (And start with the "old" state you made money in, not the one you moved to.)

If you're using a tax preparation software program, it will pull up the correct form for you. But if you're going it alone, then you'll need to determine what the particular state requires. Some states offer a "part-year" return (meaning you only claimed residence for part of the year), while others have you fill out a regular or nonresident return after a move. The good news? That's pretty much the gist of it. Fill out the forms, send them off and just remember that next year you'll (most likely) only be filing in the current state you live in.

But while that answers how your tax preparation is affected, it might not tell you what exactly is happening with your actual taxable income. And in some ways, it's difficult to say, since each state had different income taxes.

However, we can speak broadly and say that most states will prorate your taxes based on the amount you actually made in the state where you're filing. Basically, it will take your entire income (from both states), and then tax you on the percentage you made in each state. So let's say you made $100,000; $20,000 of that income was in one state, $80,000 in the second. Both states might tax you on the full $100,000, but the first state will only ask you to pay 20 percent of the taxes that are due on it, and the other will ask you to pay 80 percent of the taxes due. Other states might ask you to prorate your itemized deductions, exemptions and credits so that you're only paying taxes based on a prorated portion of those.