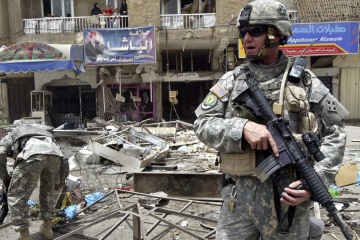 If you're a soldier serving in a combat zone, your income won't be taxed.
Akram Saleh / Getty Images

Soldiers' salaries are not taxable while they serve in a combat zone or while they recover from injuries obtained there [source: Liberty Tax Service]. This exclusion also applies to accrued-leave, re-enlistment bonuses and student-loan repayments. If a soldier receives payment for an idea or innovation developed in a combat zone, it's excluded from gross income [source: Liberty Tax Service]. Basically, if it occurs in a designated combat zone, it's tax-free.

There are a couple of exceptions. Commissioned officers have to pay tax on the amount of combat pay they earn above the highest enlisted salary [source: Bell]. Also, the exclusion only applies to soldiers stationed in a combat zone. Soldiers in a combat zone while on leave from a noncombat area, or merely travelling through or over the zone en route between two noncombat areas, are not eligible for the exclusion [source: IRS].

Tax-free status for a person's primary income source seems like a great thing, and it usually is. But sometimes in taxes, more income is better, and soldiers serving in combat can find themselves at a loss for certain benefits. So there are times when the IRS allows soldiers to declare their combat pay but still doesn't tax it. For example, combat pay can be included as income for the purpose of determining limits on IRA contributions but still excluded for purposes of taxation [source: IRS].

Circumstances are similar with the earned income tax credit (EITC). This credit allows low-income earners to get back some portion of the tax they've paid on their income. To qualify, their earnings need to fit within the EITC bracket. Many military personnel qualify for the credit based on their income, but the combat-pay exclusion can reduce their income to below the EITC minimum amount. As with IRA contributions, then, active-duty military are allowed to count their combat pay for purposes of qualifying for EITC while still excluding it from taxable income [source: Bell].

The IRS has established some military-specific guidelines for some other deductions and credits, too.

In Case of Death

If a soldier dies in combat, from injuries acquired in combat, or in a terrorist or military action, any taxes due for the year of death are forgiven, and any taxes already paid for that year are refunded. Tax debt from previous years may be forgiven as well [source: IRS].